Presented: April 2, 1985, by Melvin Endy, professor of religious studies and dean of the College 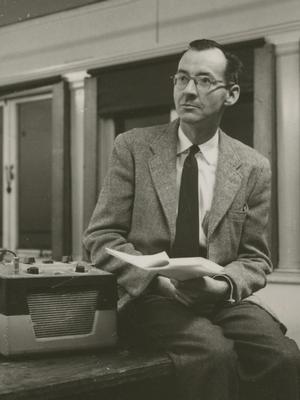 Robert Rose Carson was born in Geneva, N.Y., in 1912. For the city of his birth he always retained a warm affection, and he returned there frequently during his lifetime to visit relatives and old friends. After his education in the local schools, he entered Hamilton College in the fall of 1931 and was graduated with a bachelor of science degree in 1935. The following year he took his master’s degree in English at Hobart College, after which he accepted an appointment to teach English and history at the American University in Cairo, Egypt. He remained there for three years, storing up many happy memories both of his teaching experiences and of his travels through Europe during vacations. On his return to this country, he married a long-time Geneva friend, Marion (Molly) Knight Wilson, and then proceeded to Ames, Iowa, where, for the next three years, he taught English and speech at the state university.

His next move was to Cornell University to pursue graduate study in speech, completing all work necessary for his Ph.D. except for a dissertation.

In 1949 he returned to his alma mater as instructor in speech, remaining there for 22 years before his retirement as associate professor in 1971. His wife Molly died in 1972 in Clinton, where he lived until his own death in 1985.

Aside from his family, Bob’s central interests and affections were for Hamilton College (and particularly his beloved Sigma Phi fraternity) and St. James Episcopal Church in Clinton. He was an enthusiastic and popular teacher who continued to have a warm relationship with many of his students after their graduation; and after his own retirement, he formed new friendships among the undergraduates. A symbol of his life was the door of his lovely old Clinton home, which was always unlocked day and night, and open to his many friends, both old and young. He was a gracious and generous host. He enjoyed people, and they enjoyed him. He will be remembered with affection by all those whose lives he touched as a teacher and as a loyal friend.