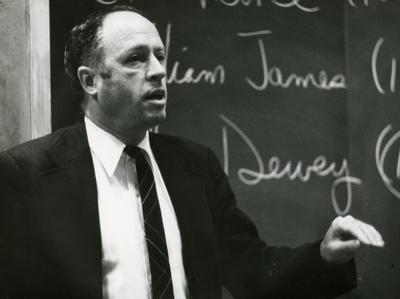 Russell Blackwood was born in Philadelphia on Feb. 6, 1928. Russell very early developed an interest in interdisciplinary studies (long before such studies were popular) and pursued that interest after graduating as a Phi Beta Kappa student and intercollegiate athlete in track from Dartmouth in 1948. He went on to get his master’s at Colgate in 1951 and his doctorate at Columbia in 1957, and also studied at Union Theological Seminary during this period, and later at the Institute of Islamic Studies at McGill University. He came to Hamilton from Hood College in 1957 as an assistant professor of philosophy and religion, at a time when the two now separate departments were joined, and was a member of our faculty since then, retiring in December 1995, but continuing to teach at least one course each year through December 2006. He also served in the United States Air Force Reserve from 1958 through his retirement from the military at the rank of captain in 1970.

Perhaps Russell’s major philosophical interest was in non-Western philosophies, including Islamic and Buddhist thought, especially the way the internal logic of some sub-groups within those areas challenged standard principles of classical Aristotelian logic, and some of his most interesting scholarly articles were in this area.

During his career at Hamilton, Russell served on virtually every committee of the College, was College Marshall (1975-81) and chaired the Department of Philosophy from 1965 to 1981. He was especially proud of his role as the initial director of the Asian Studies Program, of chairing other interdisciplinary programs such as Medieval and Renaissance Studies, and of his enthusiastic participation in the early years of the HEOP program. His travels for research and study of non-Western religious and philosophical movements took him to such places as Cambodia, Egypt, India, Japan, Nepal and Pakistan. He was an occasional lecturer at Tenri University in Japan and the University of Athens in Greece and was a founding member of both the Society for Asian and Comparative Philosophy and the American Council for the Study of Islamic Societies. He also served as long-time trustee for the American Institute of Pakistan Studies.

While Russell viewed himself primarily as a teacher, his research and publication reflected his interdisciplinary interests. His textbook, Problems in Philosophy: West and East (1975), co-authored with Arthur Herman, was one of the first modern anthologies to combine Western and Eastern sources addressing common philosophical problems. He also was co-editor, with colleague C.L. “Lafe” Todd, of Language and Value, based on a conference held at Hamilton on the work of Utica banker and philosopher Alexander Bryan Johnson. His travel to Japan enabled him to pursue his interest in the sect of Tenrikyo that became the subject of two papers that he contributed on the logic of its beliefs and practices. His academic presentations and published papers reflected a wide ranging set of interests and are distinguished for their clarity and their probing of challenges to Western assumptions about logic arising from other traditions.

Russell will be most fondly remembered by his colleagues and students, however, for his skills as a teacher. As my colleague Rick Werner commented to me, Russell was inventive in employing clever examples to illustrate difficult points, was infinitely patient with students and always had time for them. In addition, he had the remarkable ability to take the most inarticulate question from a confused student and turn it into a pertinent comment on the discussion at hand. I remember Russell frequently responding to such questions by saying, “Well, you mean point A or perhaps point B or maybe C,” all of which were acute, and then proceeding to respond to each one in turn, while implicitly but clearly communicating the need for more precision on the part of his students. For many years, Russell required each of his students to submit at least one paper that was completely free of grammatical errors. This exercise, called the “yes paper,” was a requirement for passing his course.

Russell always had the right remark for every classroom occasion. During my second year at Hamilton, we were team-teaching a large course on the History of Ancient Western Philosophy. Russell was lecturing on Aristotle’s concern with natural law and used the example “Metals expand when heated.” I suddenly recalled I had left the kitchen stove turned on high when I had left home that morning. Should I continue to listen to Russell or save my house from a possible fire caused by expanding heated metal? As I ran in a panic from the Science Auditorium, I heard Russell remark to the class something to the effect that, “Aristotle sometimes has that effect on those sympathetic to Plato.”

Russell was predeceased by his wife of 51 years, Elizabeth “Betty” Blackwood. He is survived by his two daughters, Cynthia and Rebecca, and his six grandchildren and a great grandson.

Russell was a dedicated and sympathetic colleague who was deeply committed to Hamilton and above all to his students. Russell died in Philadelphia on Jan. 12, 2007. His students and colleagues will miss his humanistic and intellectually engaged perspective, his dedication to rational inquiry and, above all, his kindness and concern for others.