Presented: May 3, 2005, by Derek Jones, professor of economics 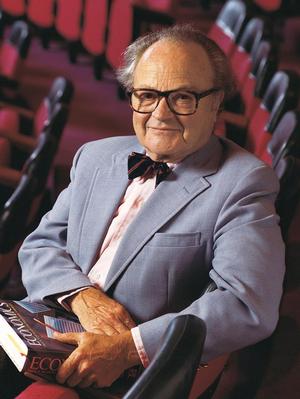 Sidney Wertimer, always known as Sid, was born in Buffalo, N.Y., on October 28, 1920. In 1938 he graduated as the valedictorian of the Nichols School in Buffalo. Four years later he was awarded a B.S. in economics from the Wharton School of the University of Pennsylvania. While in 1952 he was to start what turned out to be the first of 52 years as an instructor in economics at Hamilton, the route from Wharton to Hamilton was quite circuitous.

Soon after graduating from Wharton in 1942, he joined the Navy. As he was often apt to tell his colleagues at Hamilton, he saw much action during the Second World War, including his commanding an anti-aircraft gun (during the Battle of Lingayen Gulf). Released from the Navy as a lieutenant, in 1946-47 he served as a teaching fellow at the University of Pennsylvania. Thence it was back to Buffalo in 1947, where he was an instructor in economics and he obtained an M.A. in economics in 1949.

Working in the economics department in Buffalo in the late 1940s had placed him in contact with many illustrious economists. So from there he took the next step in furthering his education in economics when, together with Ellie, whom he had wed in 1947, he went to the London School of Economics. There, as well as becoming a devoted anglophile, including a reputed record run of daily attendance at London theatre productions, he earned his Ph.D. in economics by writing a thesis that examined migration patterns from the United Kingdom. It was while he was at L.S.E. that John Gambs, then the chair of the one-person Economics Department at Hamilton, offered him a job as an assistant professor in 1952. The terms of the contract were relayed by using the newfangled phenomenon of the transatlantic telephone. While Sid accepted the job more or less on the spot, the static on the line meant that he was rather unsure as to what exactly his teaching duties were to be. And, as he used to tell the story, he was astonished to discover upon his arrival in Clinton that a key course he was expected to teach was accounting — a subject of which he had almost no knowledge! Such were the inauspicious beginnings of what was to prove to be a legendary course. He taught accounting nearly every year while at Hamilton until 2004, including 15 years as emeritus!

After arriving in Clinton, Sid duly progressed through the ranks at Hamilton becoming an associate professor in 1956 and a full professor in 1964. In 1987 he was appointed the Marjorie and Robert McEwen Professor of Economics. He was also chair of the department from 1965 to 1975, during which time he was to recruit Martin Carovano who eventually became the president of Hamilton. Sid left his mark on the College in many other ways in the broad administrative area, notably during his service as associate dean from 1957 to 1965, and later as provost from 1975 to 1980, as well as a resplendent College Marshall from 1980 to 1991. In 1996 he received an honorary doctorate of humane letters from Hamilton College.

While Sid never produced a great volume of scholarship, nevertheless he did co-author (with John Gambs) an influential textbook, Economics and Man. In its day it was widely used. He also wrote a critical assessment that introduced a volume, a “Treatise on Banking,” which examined the life and work of Alexander Bryan Johnson, a local banker who lived from 1786-1867 in the Utica area. (Interestingly a colleague of Sid’s, Lafe Todd in the Speech Department, also wrote a treatise about Johnson, more evidence that interdisciplinary cooperation is a long-standing tradition at Hamilton.)

But Sid was first and foremost a teacher. The stories from his devoted students are many and often splendid. One tangible way in which some of his students have recognized Sid’s mark on their lives is to be found in the various prizes and professorships that have been established in his honor. At Hamilton these included the Sidney and Eleanor Wertimer prize scholarships and the endowed chair established in his name. In addition at Harvard Business School there are the Sidney Wertimer prize scholarships.

Since I had the privilege of co-teaching a course with Sid for several years, I could share with you some of my more memorable observations on Sid’s teaching moments. But time is limited and, rather than do that, I would like to dwell on one dimension of Sid’s teaching in the evolution of instruction in economics at Hamilton. When he arrived Sid found that economics at Hamilton was dominated by a qualitative approach and emphasized an institutionalist methodology. Sid struggled to bring modern innovations in economics to the Hamilton classroom. One indicator of his success is that it was he who was the first instructor in economics at Hamilton who used graphical techniques to help elucidate core issues including price determination. He also added the new science of Keynesian economics to the curriculum. So, generations of Hamilton students are indebted to Sid, not only for his astonishing gifts as a natural teacher and storyteller in the classroom, but also because it was Sid who was the original “hi-tech” guy in economics at Hamilton.

Sid was a vigorous and energetic man with a great capacity and appetite for public service. He was a volunteer fireman for more than 40 years beginning in 1957. In 1965 he served what was to prove to be the first of three stints as a board member of the Kirkland Art Center. He was a member of the ABC board from 1972 to 1973, of the Hospice board of directors from 1986 to 1999 and also the board of directors of the Oneida County Economic Development and Growth Enterprise.

While Sid retired in 1991, he continued to teach accounting. He died on February 1, 2005, in Charleston, S.C., with his family at his side. A raconteur of the first order, he was knowledgeable in so many areas — from knowing most students by name and also being able to identify nearly all trees on the campus and provide details of their histories! All who knew him will miss this wonderful Renaissance man, his distinctive attire, his twinkling eyes, his cheerful disposition and, perhaps above all, his unmatched and abiding passion for Hamilton College.