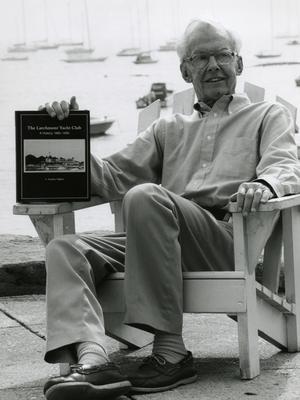 C. Stanley Ogilvy, a member of the Hamilton College faculty from 1953 to 1974, recently died in Mamaroneck, N.Y., on Long Island Sound at the age of 97. I knew him as a faculty colleague and have been asked to write this minute in memory of him.

At our last meeting we heard two other memorial minutes, one for Robert Browning of the German Department and the other for John T. Anderson of the Mathematics Department. A colleague said to me afterward that it was interesting to hear about two respected members who seemed so different in their strengths. Professor Browning, whose scholarly reputation through books and other publications extended far beyond this hilltop, and Professor Anderson, as dedicated to mathematics as Browning was to German literature, who had established his reputation as a consummate teacher. John, himself, had been a student of Stan Ogilvy, and hence would have been better able than I to write this minute. But he has said that he learned from Stan the following truth, “One’s compassion for students and one’s passion for subject are mutually dependent.”

Stan’s passion for mathematics showed up both in his teaching and in his publications. The Burke Library lists under his name 37 entries. Many of these are books on various branches of mathematics, but there are also many on sailing, the other passion of his life. Several of these books were translated into other languages such as French, German and Japanese. Stan’s reputation then was both teacher and a scholar.

Stan prepared for this career by growing up on Long Island Sound for the sailing side of his life and for his mathematical life by attending The Berkshire School, Williams College for his A.B., Jesus College at Cambridge, Columbia, Princeton and finally Syracuse where he earned his Ph. D. Along the way he became a member of Phi Beta Kappa, Sigma Xi, the scientific honor society, and a fellow of The American Association for the Advancement of Science.

I first met him in 1957 when I became a member of this faculty. By that time he had already established himself as a pillar of the community. He served on important committees and was already respected as a teacher and a scholar. As examples of his leadership, he was one of the founding members of the Hamilton Chapter of Sigma Xi in 1965 and he became chair of mathematics in 1969.

Stan was also known on the Hill because of his second love. He was a champion Star Class sailor, regularly competing in and sometimes winning national as well as international competitions. His homeport was Larchmont, and his favorite place in the world was that part of the Long Island Sound. At Hamilton in those days commencement wasn’t until well on in June, already prime sailing weather. So Stan was famously known to skip these ceremonies. Finally the lure of sailing became so strong that in 1974 he retired early to spend his precious remaining years sailing. After retirement he changed to the bigger Etchells Class and had considerable success in racing in that competition as well.

While still on the Hill, Stan was also known as the possessor of a Duesenberg convertible, which during the school year he kept in a barn behind the Huntington House where he had an apartment. This accoutrement added to his overall reputation as a writer, scholar, teacher, sportsman and sailor, and made him seem to younger faculty like me a modern equivalent of the Renaissance man.

Although many of his publications have to do with mathematics, there are also many on yachting and the pleasures of living near and on the water. His latest book, published in 1994, is The Larchmont Yacht Club: A History 1880-1990. A yachting historian, John Rousmaniere, says of his books on sailing, “…that they have been characterized by their affection for the sport, graceful expression, rigorous analysis and extreme generosity with ideas that many other sailors would have regarded as proprietary.”

Another view of this sailor, especially interesting because it links mathematics and sailing, is offered by the Commodore of L.Y.C., Howard McMichael, who says, “Stan’s success as a sailor was in no small measure due to his math professor approach to analyzing the fickle Long Island Sound winds. He kept a diary of every race, tracking the winds and his responses with the results to prove him right or wrong. When Stan and my father were racing E-22s, they would meet at our house after every race to compare notes and tactics (and toasting the victor for the day). Their knowledge of the probabilities of the ways of winds made them both very hard to beat.”

At this point in order to do justice to Stan the mathematician as opposed to Stan the sailor, a quote from his book, co-authored by John T. Anderson, Excursions in Number Theory, is appropriate. In leading up to a discussion of mathematical induction the authors write, “There is a well known formula that delivers prime numbers (see notes) for the first 79 cases; but when you try n=80 the formula fails. The physicist would be content to risk a theory with far fewer than 79 experimental verifications. In mathematics neither seventy-nine nor a million and seventy-nine are enough. We must have a different sort of proof.”

Aside from showing that he understands the difference between using induction for the purposes of winning sailing races and induction in mathematics for this quote shows that Stan here, too, is characterized in his writing by an affection for the subject, graceful expression, rigorous analysis and a generosity with ideas. And his writing illuminates his life. This description seems a fitting epitaph for our erstwhile colleague, Stan Ogilvy.