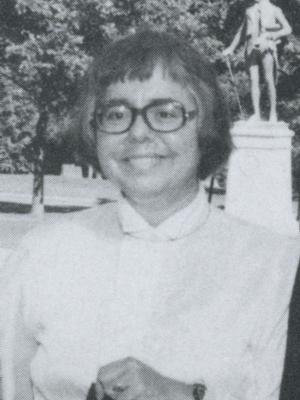 Sydna Stern Weiss, known to her friends affectionately as Bunny, was born in the not-so-distant town of Schenectady, N.Y., in 1940. After quickly working her way through the Schenectady public school system, she entered Vassar College at the age of 16 and earned a bachelor’s degree in mathematics (and coincidentally, but somewhat less officially, bridge). It was, however, her growing interest in German language and literature at Vassar that was to become the decisive turn in her professional life. During her Vassar years she also spent a summer at the Shakespearean School at Stratford-on-Avon in England. After leaving Vassar, she was awarded an NDEA fellowship and studied for two years at Brown University. Later, having earned a Dank Stipendium given by the German government, she studied at the University of Frieburg in western Germany for a year and a half. After teaching German at Manhattanville College for three years, she was awarded both NDEA and graduate fellowships at Princeton University where she received her Ph.D. in 1975.

Sydna arrived on the Hill in 1974, and her impact on this campus was soon felt. She was not only the first woman to be granted tenure at Hamilton, but an ardent supporter of women’s concerns in that almost all-male environment. She was one of the founding members of the Faculty for Women’s Concerns and tirelessly strove to improve the environment for all Hamilton women, students, staff, administrators and faculty alike. Generations of those women were inspired and encouraged by Bunny’s unflagging support.

Bunny’s dedication to teaching was well known, most of all, of course, by students who felt the extraordinary energy with which her classrooms were charged. She genuinely loved teaching and all her students, always sharing happily in their triumphs but always there to console when needed. Indeed, despite the illness that was to take her from us, she insisted on returning to campus this fall to teach and only stopped when too weak to continue.

Sydna was an important force for change off the Hill as well as on it, especially as a founding member of the Coalition of Women in German and often as a member of its steering committee. One WIG project she authored was German and Women’s Studies: New Directions in Literary and Interdisciplinary Course Approaches. This volume was particularly influential in demonstrating the ways in which faculty could encourage the development of innovative courses about women and foster cooperation between programs in German and women’s studies. Bunny’s contributions to the annual Women in German cabaret evenings are legendary, proving that her summer in Stratford-on-Avon was time well spent. To honor her many contributions to the field, WIG has recently established a memorial fund in her name.

Her scholarship was far-ranging in scope. Her initial interests and training lay in the areas of the German Romantic period and the interrelationship of scientists and society (for which she was awarded a Danforth Foundation fellowship in 1978. One of her early articles, “Kleist and Mathematics: A Non-Euclidean Idea in the ‘Puppet Theater,’” has become a standard work on the subject. On her own, she early discovered the benefits of reading with a feminist perspective. At the time of her death, Sydna had prepared two talks in matters as diverse as Christa Wolf’s study of the consequences of the Chernobyl catastrophe and the notion of the journey in romantic literature. Perhaps closest to her heart, however, was her unfinished monograph, Woman to Woman: The Fabric of Our Lives, a study of the relationships between mothers and daughters, especially as they sustain and reinforce each other.

Sydna’s ultimate death on November 10, 1991, has left those who knew her and this campus impoverished. She will be missed.