Presented: December 6, 1983, by Melvin Endy, professor of religious studies and dean of the College 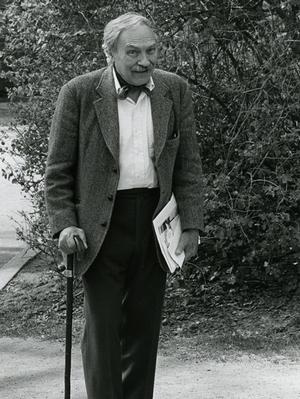 Thomas Colby, the Munson Professor of German Language and Literature, died on August 20, 1983, at the age of 62. A member of the Hamilton Class of 1942, he entered the Navy on graduation and served on active duty until 1945. After a year of study at Zurich, he returned to Hamilton as instructor of German from 1947 to 1949, when he began graduate study at Princeton University. He received the M.A. from Princeton in 1952 and the Ph.D. in 1960. After seven years on the faculty at Columbia University, he returned to Hamilton to teach German language and literature in 1959 and remained at the College until his death.

A graduate of Hamilton during what he later considered its classical era as a liberal arts institution, Thomas acquired a thorough grounding in languages, history, literature and the arts, and a strong interest in matters scientific and technological. He built upon this broad foundation through a lifetime of reading, travel, musical study and diverse kind of artisanship to become the kind of eccentric generalist and broadly based scholar that has given Hamilton its unique appeal for generations of students.

Thomas’ area of scholarly expertise spanned Medieval to 20th-century German literature and history. His scholarship focused on Herman Hesse and Frederick the Great; he was working on a study of the musical compositions of the latter at the time of his death. As a teacher his special love was German lyrical poetry. His expositions of poetic texts were illuminated as much by his knowledge of Reformation theology, 18th-century military history and technology, and baroque musical developments as by his fine command of linguistic and literary materials.

On a fall afternoon a student seeking him knew better than to look at his office, filled with tomes he had already read and no longer often consulted. No matter that office hours were listed; he was more likely to be tying dry flies or painting a trout at the Adirondack League Club, lost in reverie at home playing a rare baroque musical instrument from his extensive collection or demonstrating his latest improvement on a homemade muzzleloader to his National Rifle Association fiends at the Cassety Hollow Rod and Gun Club. When rediscovered later, attired in his Princeton robe or custom-made hip boots or a camouflaged snowmobile suit, he had most likely developed a new approach to the Goethe poem the student had come to discuss. He will be remembered by a long succession of still loyal students and by colleagues as much for his early music group, de Gustibus and his erudite conversation as for his demanding classes. Gentleman, scholar, musician, artisan, sportsman: his mold passes with him.