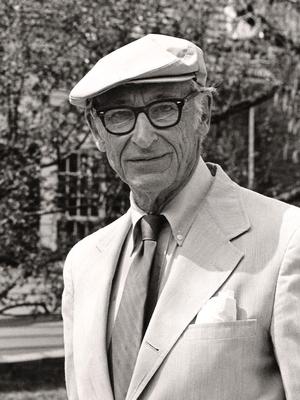 Thomas McNaughton Johnston was born on January 8, 1904, in Elfinwild, Pa. He died at his home in Clinton on January 27, 1986. He graduated from Washington and Jefferson College with a bachelor of science in 1926. A few years as a salesman for the American Radiator and Standard Sanitation Company in Houston and New Orleans helped to persuade him to study English literature instead. He received from Tulane the M.A. in 1931 and then entered upon further study at Duke, which conferred on him the Ph.D. in 1938. In the meantime at Hamilton College he was appointed an instructor in English Composition in 1934. He was an active member of the faculty until his retirement in 1972. For the last three of those years he was the Marjorie and Robert W. McEwen Professor of English.

Thomas Johnston epitomized the best of the 18th-century English gentleman, altogether fitting since he was a specialist in the literature of that period. He wrote elegantly and wittily, as can be heard in the words of the songs for Hamlet at Hamilton, the best known of a number of musicals written for the delight of the community and produced as a farewell to departing seniors. His speech “On the Brink of Reminiscence,” given at the alumni luncheon of 1972, was his last public presentation; its flavor can be detected in the wonderful description of Dunham Dormitory as t he “triumph of economy over the imagination.”

As he wrote, so he taught, though, no doubt, very few of his students came close to his skill in writing. As a tribute to that skill and his service to the College, his friends and former students established the Thomas McNaughton Prize in English for the “most elegant essay” submitted to the Department of English during the academic year. As his final service to the College for which he labored so long, for a number of years he was the one who judged which was the best among the essays submitted.