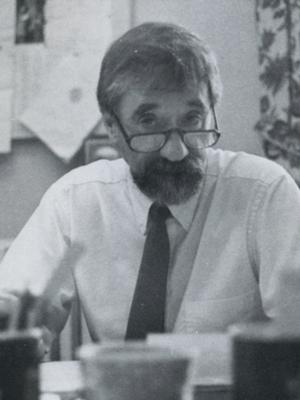 Warren Earl Wright came to Hamilton College as an assistant professor of speech in the fall of 1960 – three months after his 31st birthday. He was the first member of the Speech Department with a Ph.D. in the subject. At that time the College required that all students take a course in public speaking each semester in addition to the five three-hour courses, which were the normal academic load. Speech courses met typically for two hours each week and carried only one or two hours of graduation credit. Warren brought a deep commitment to both the intellectual content and the polished performance sides of public speaking. (His Ph.D. dissertation was a study of the magnificent writings of Judge Learned Hand.) This intellectual commitment exerted a strong and beneficial influence on Hamilton’s Speech Department with the result that in 1965 the upper-level speech courses became full-credit electives. In 1969, when the faculty eliminated distribution requirements, all Speech Department offerings became full-credit three-hour courses able to accommodate the full measure of intellectual content that they deserve.

He received his bachelor’s and master’s degrees from Emerson College. He served for four years in the U.S. Naval Reserve aboard the submarine Argonaut, applied for the Naval Officers’ Candidate School and was accepted four months later. Unfortunately he had been drafted into the Army in the meantime. His application for a transfer was forwarded to the Pentagon where “it met an untimely end,” and he ended his military career in 1954 as an Army battalion operations sergeant. He subsequently was an instructor in speech at Purdue University before continuing for his Ph.D. at the University of Illinois. He retired in 1994 as Upson Professor of Rhetoric and Oratory.

College and community service were important parts of Warren Wright’s personal commitments. Over the years he served on many faculty and faculty-trustee committees including the Religious Program Committee, the Admissions Committee and the Faculty Committee on Student Affairs. The work of some of the committees captured more of his enthusiasm than others—in one annual report to the dean he described the nature of the work of the Religious Program Committee as “pointless polemics.” He was chairman of the Speech Department for 10 years. He served in 1980 and 1981 as faculty parliamentarian, an elective position that was created soon after the Hamilton-Kirkland merger in 1978. In honor of his father he established, in 1985, the Earl H. Wright Prize for Distinction in Advocacy. He served the wider community as an interim pastor for the Millers’ Mills Community Church, the Sauquoit Presbyterian Church and the Ilion Baptist Church, and he was in demand as a professional speaker at various events in the area. He served faithfully for many years as an official at Hamilton track meets. Many faculty members recall that Warren went out of his way to welcome them to the Hill as newcomers, thus promoting the sense of community that he felt so deeply.

Throughout his professional career Warren Wright maintained a deep interest in legal and political rhetoric and in the stylistics of language. He authored a number of scholarly papers, which were presented at professional society meetings and published in professional journals. He coauthored a book, Public Address, with Charles Todd, former chairman of the Speech Department.

Professor Wright loved teaching and enjoyed his students. In addition to his academic-year duties he taught for 14 years in the HEOP summer program preparing these students for the rigors of classroom presentations to come. He continued to take an interest in them during their college careers and was always available to help in special situations such as coaching for job interviews. But no first name familiarity crept into his classroom! “Mr. Ludwig” or “Miss Garcia” (never “Ms.”), or perhaps just “Ludwig,” was the form of address. His former students all remember him as “Professor Wright.” He was a classroom “presence” according to Professor Todd. He often terrified his students when they struggled through an all-too-familiar oration on, say, “Capital Punishment” or “Euthanasia,” probably cribbed from a fraternity file dating from “Swampy” Marsh’s days as department chairman. He would interrupt these moldy old standbys and demand one of his famous “impromptus.” One of his most famous was “The Joys of Riding in a Tumbrel.” The hapless student would say, “But what, Sir, is a tumbrel?” and Professor Wright would say, “Use your imagination.”

Beneath this formidable and rather frightening classroom presence his students soon recognized a sly sense of humor and a genuine interest in their progress. They responded by learning to speak easily with knowledgeable confidence before any group. Many alumni recall with fondness their experiences in the classes of this really lovable man, and they acknowledge with gratitude the present daily benefit of the things they learned from him. Upon Professor Wright’s retirement in 1994, Robert S. Ludwig ’72, a former student, established The Warren E. Wright Prize in Public Speaking.

Warren E. Wright died on February 5, 1998. In this memorial minute the Hamilton College faculty recognizes his many contributions to the College and extends its deepest sympathy to his wife and family.