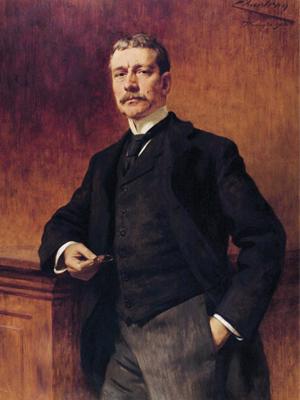 From his former home at the peak of College Hill to the blue New York State Historic Marker outside his birthplace at Buttrick Hall, Elihu Root, Class of 1864, looms large over the campus as one of Hamilton’s favorite sons. Yet his legacy extends far beyond College Hill: 2012 marked the centennial of Root’s 1912 Nobel Peace Prize for his pioneering work in international relations.

Though he lived and worked in New York and Washington and traveled around the world, Hamilton was always the center of Root’s world. His father Oren was a long-serving professor of mathematics at Hamilton, a position Elihu’s brother Oren Jr. would inherit. Elihu himself was born in the center of campus in a building that now houses the President’s office, and graduated at the top of his class in 1864.

A successful career in private practice as a lawyer in New York followed, and Root moved in the same circles as some of the era’s biggest names, including John D. Rockefeller and Andrew Carnegie, a personal friend of Root’s. His private practice brought him a significant personal fortune, but it was only with his 1899 appointment to President William McKinley’s Cabinet as Secretary of War that Root’s name became widely known. Upon his appointment, his contemporary Theodore Roosevelt praised Root as “a man of singularly keen intellect...possessing great tact in judgment...entirely fearless in standing up for the right.”

Despite his lack of military experience, McKinley appointed Root to the position because of his adroit grasp of legal principle. Root brought his lawyer’s skills to bear by reforming the War Department and the Civil Service as well as by effectively managing the United States’ new territories of Cuba, the Philippines, and Puerto Rico (won in the wake of the Spanish-American War). After McKinley’s death, Theodore Roosevelt kept Root in his position as Secretary of War for the remainder of his truncated first term and then made him Secretary of State in 1905 following the death of the previous secretary.

It was here that Root did perhaps his most important work. He was an arbiter of the highest caliber, and worked to establish international law as the first recourse when international tensions arose. According to his Nobel biography, Root felt that international arbitration “represented mankind’s best chance to achieve world peace...but he also believed that it would take much time, wisdom, patience, and toil to implement it effectively.” 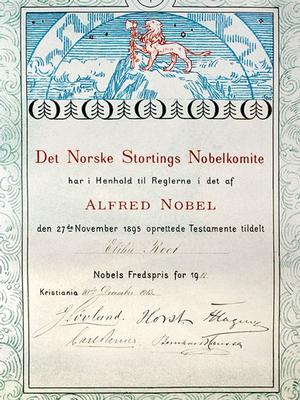 The Nobel committee recognized Root’s efforts with a belated Nobel Peace Prize for 1912 that was actually awarded in 1913. The Nobel Selection committee decided not to award a Peace Prize for 1912 due to the lack of suitable candidates, but awarded two prizes in 1913 to compensate. Root was slated to give his Nobel lecture in Oslo, Norway, in the fall of 1914, but in an ironic twist of history, World War I broke out before Root could deliver his speech.

In his speech, he praised a rare class of men “with exceptional power of statement or of feeling and possessed by the true missionary spirit” who could “deliver a message to the world, putting old truths in such a way as to bite into the consciousness of civilized peoples and move mankind forward a little, with a gain never to be altogether lost.”

An apt, if unwitting, description of Root himself.