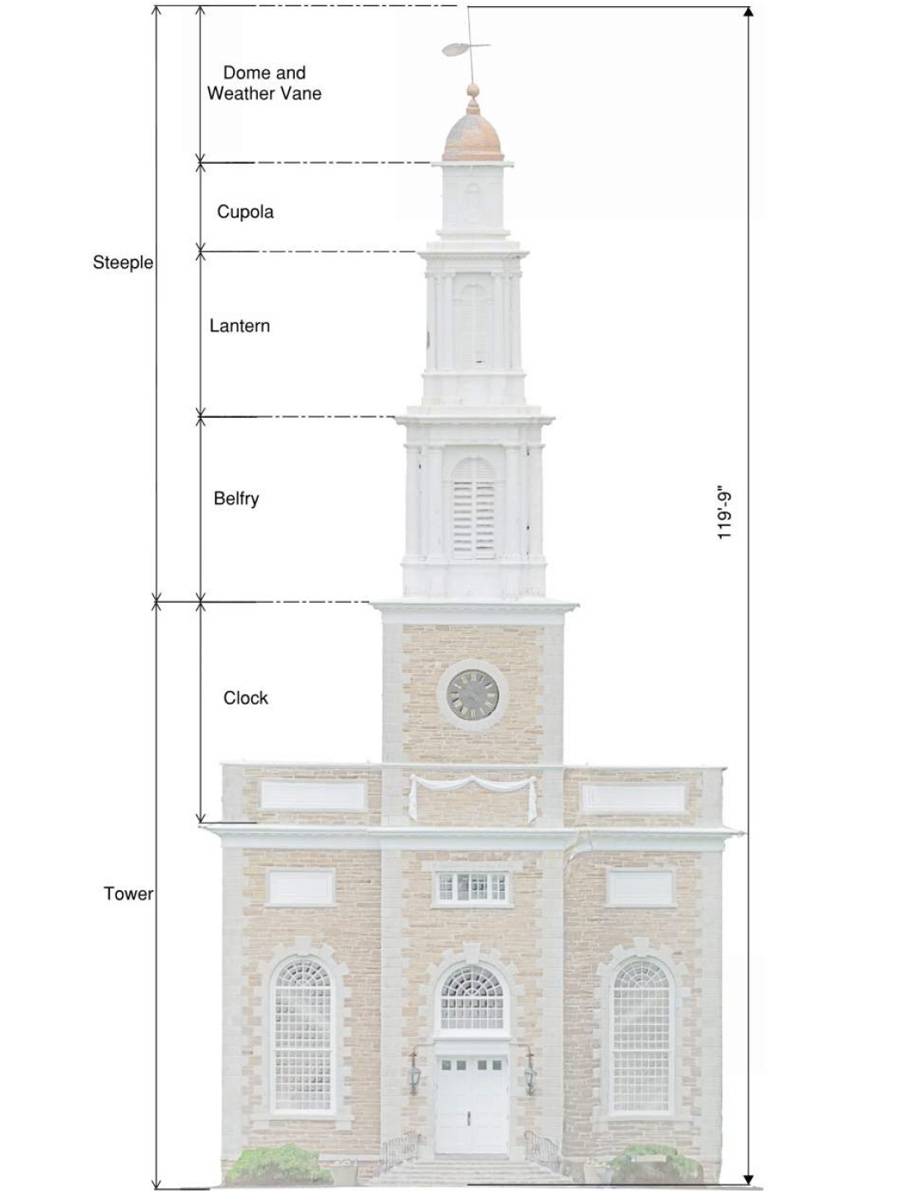 The cupola is capped with an octagonal segmental plinth and dome, upon which stands an octagonal cap and ball through which extends a wrought iron mast and weather vane. The plinth, dome, and cap are sheathed in flat seam copper panels that have been polished and lacquered or gilded with copper.

The weather vane is a beautifully crafted quill motif, symbolizing education and intellectual pursuit. The weather vane mast extends approximately eight feet above the dome and is crowned with a six-sided star and tri-forked finial. The quill measures approximately four feet in length from tip to end of feather. 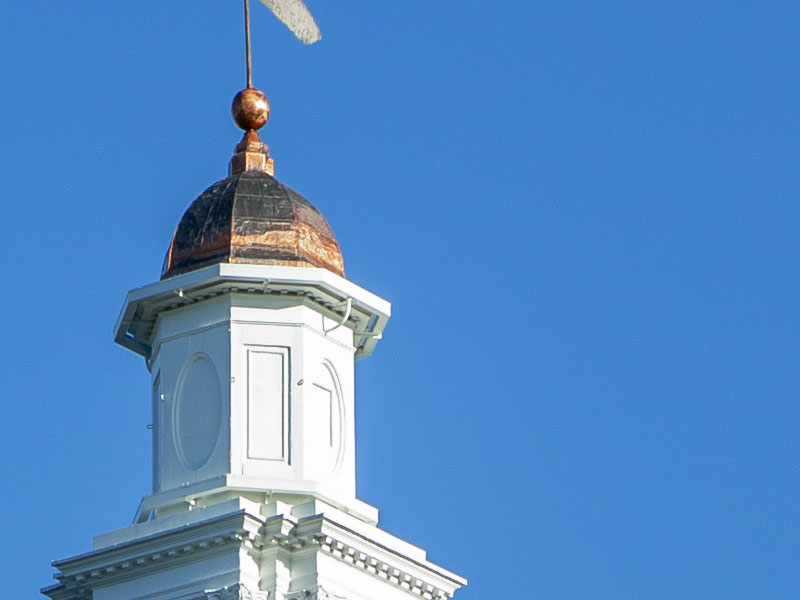 The upper-most accessible level of the steeple is the cupola, which is an equal-sided octagon in plan. Each of the eight facades contains a rail and stile panel with a single flush recessed field panel within. The four sides on axis with the building contain vertical oval field panels, while the remaining four sides on the diagonal contain vertical rectangular field panels. There is a square hinged access door (approximately 16-inch square) in the west facing oval panel, allowing access to the roof of the lantern level. There are no columns, and the entablature is greatly simplified with an architrave molding, frieze panel, dentils, and a cornice. 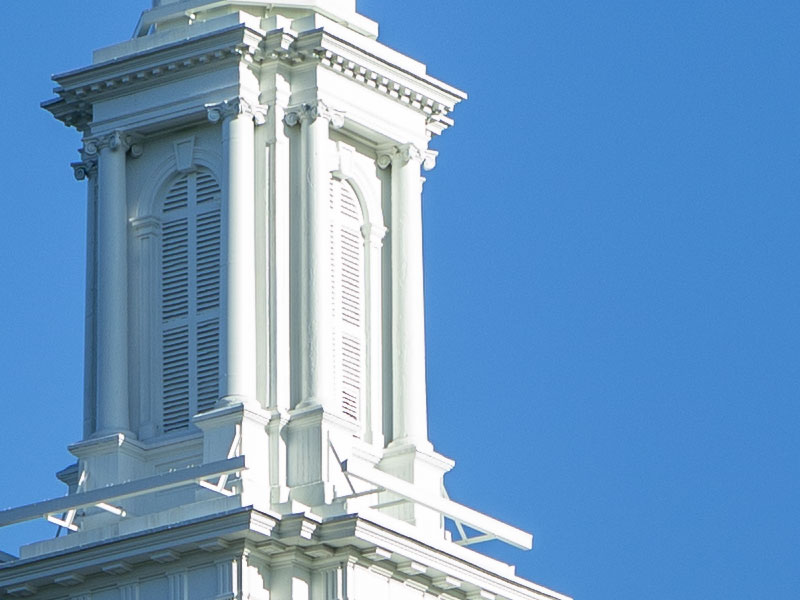 The lantern level is approximately 11-feet square overall at the drip edge of the cornice. This level is similar in general architectural composition to the belfry level albeit smaller and in the Ionic rather than Doric classical order. Each of the four façades at this level consists of a pair of Ionic columns with an entablature and a round arched architrave with keystone, and a louvered panel field. These columns also bear on plinths, and they too have projecting light boxes anchored to the plinths. The cornice of the belfry level below is covered with a painted flat-seam lead-coated copper roof that extends up under and around the bead board wood column plinths with painted copper panels between, similar to the level below. 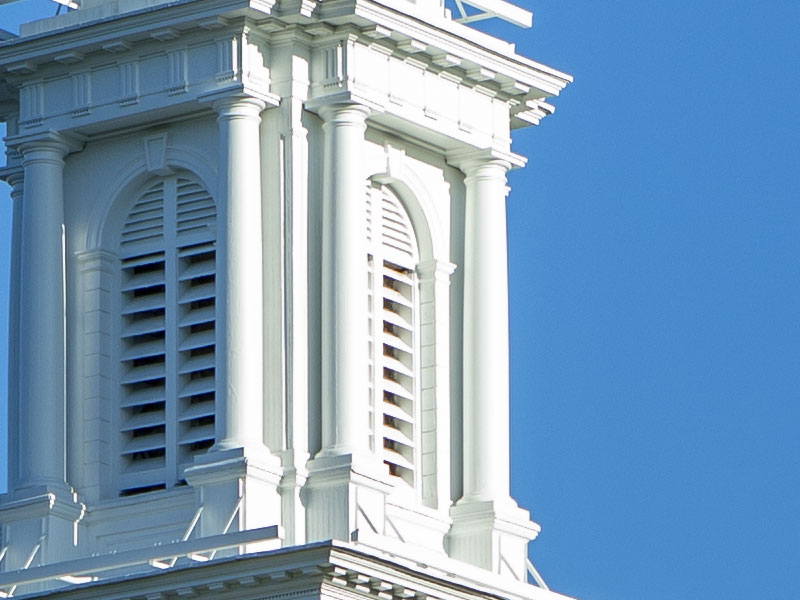 The belfry level is approximately 16-feet square overall at the drip edge of the cornice. Each of the four façades at this level consists of a pair of Roman Doric columns set on raised plinths, and supporting a Doric entablature. The entablatures transition around the corners in a stepped configuration. Between the columns at each elevation is a composition consisting of a pair of engaged pilasters supporting a round arched architrave and keystone. Within this composition are open louvered panels behind which is a Meneely bell dated 1899. This is a single peal bell hung from a cast iron yoke and mounted to a wheel with a rope. 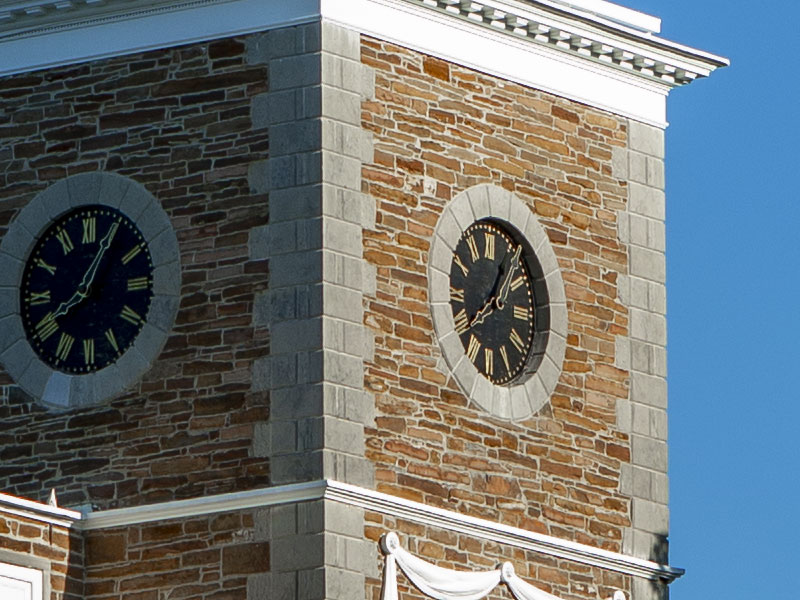 The tower consists of a shaft of stone masonry 18-feet square engaged with the main east façade and is the structure that supports the wood steeple above. The east façade of the tower sits nine feet proud of the main façade and contains the primary entrance and narthex to the Chapel. The tower walls are constructed of thick random ashlar stone masonry, the field being of Oriskany stone, with quoins, voussoirs, lintels, and trim of dressed Trenton limestone.

The clock level consists of the top 18 feet of the stone masonry tower and contains one full five-foot diameter round masonry opening (east façade) and recessed masonry for the clock faces on the north and south sides.

Did you catch a terrific performance or lecture in the Chapel? Fight nerves as you stood to deliver a speech? Return to get married? Please share your Chapel memories with us.