Since it came down in May, it’s been analyzed, disassembled, repaired, and/or rebuilt. Finally, most of the scaffolding is now removed, and the refurbished steeple atop the iconic College Chapel is positioned to beckon Hamiltonians for another couple of centuries.

Observant admirers will notice that the formerly all-white steeple now has accents of gray and green, and the dome and the quill weathervane have gone from a bright new-penny copper to a shade of gold.

The new colors reflect a meticulous effort to preserve as much of the steeple’s history as possible and practical. Continue Reading 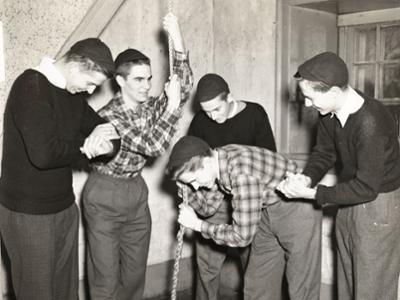 Whether alerting students to the start of class or calling them to worship, the Chapel bells sounded loud and clear thanks to diligent student bell ringers who for generations rang the device by hand.

Bell ringers lived below the Chapel steeple in quarters on the northeast corner of the third floor. Clarence Aldridge ’45 remembers: “It was stark. There were four iron railing beds with skinny mattresses on them, four highboy dressers, and then over across the inside wall there were four closets that were like stalls with a door on them. Behind the first window [at the northeast corner] was the lavatory — no shower.” Adjacent was a room with desks, “little wooden ones with rickety chairs…. Over the years, the various occupants were able to acquire a rug or an easy chair that was worn out.”

The job of student bell-ringers became obsolete in 1950 when a mechanism was installed to automate the bell ringing. 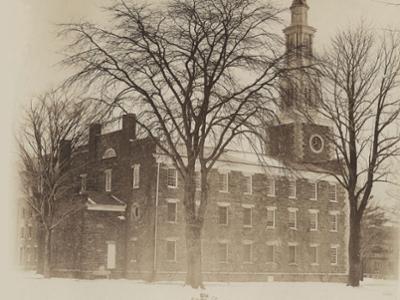 In the early years of the Chapel, students were summoned to daily 6 a.m. religious services by the bell, “which rang for two minutes — to dress in — and tolled for three — to get to Chapel,” noted Walter Pilkington in his 1962 history of the College. The hour was a source of misery, especially in the bitter dark of winter mornings (the Chapel was heated by a lone stove in the center of the hall), and services eventually were pushed back to 7 and then to 8 a.m.

In 1936, compulsory weekday-morning services were cut to thrice a week. “The resentment against it by the undergraduates was so deep-seated that I feel that any benefits which might have been derived from compulsory week-day chapel were defeated by the attitude of the men,” wrote Meredith Conley ’36 in the Hamilton Alumni Review.

In 1942, services were moved to noon; mandatory attendance eventually dwindled to once a week, and the requirement was dropped altogether in 1965 following years of sometimes acrimonious debate and at least one student protest in 1964. A Board of Trustees committee cited “a reluctance, as a matter of principle, to associate compulsion with religious worship.” 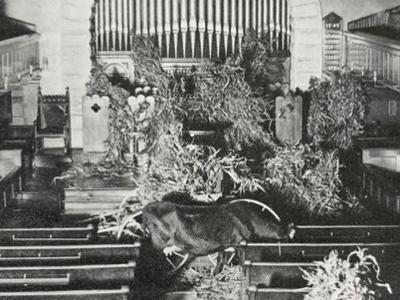 Among the many Chapel-related pranks over the years, perhaps the messiest (and foulest of scent) involved livestock. According to the article “The Eternal Sophomore: Tales of High Jinks on College Hill” that appeared in the Fall/Winter 1986 Hamilton Alumni Review, the all-time record was set by members of the Class of 1842, who herded 120 sheep and 15 mules into the Chapel.

“The students arranged the mules on stage, with the animal possessing the longest ears and gravest face in the center, where the president habitually sat in the midst of the learned faculty. The sheep formed the audience below. Although not overly subtle, it was symbolism of a captivating kind,” the article noted.

‘Ringing Off the Rust’: A Hypnotic Tale

To mark the triumph of surviving their first year, freshman in the College’s early days would seize control of the Chapel bell and ring it all night, accompanied by other incessant noises to keep everyone, particularly the sophomores, awake.

A piece in the Fall-Winter 1986 Hamilton Alumni Review tells this story:

“But on one occasion, in 1844 the faculty, no doubt to assure its own slumbers, prevented the freshmen from seizing the bell. As a result they became ‘rusty sophomores,’ having failed to ring off the rust, and were mercilessly taunted by the incoming freshmen class as ‘goody little boys afraid of the faculty.’ The sophomores hatched plans in secret to get even with their tormentors. When they were ready to ring off their own rust in turn, the sophomores stole the bell and hid it so well that it could not be found in time.

“In order to steal the bell, they had to get past Justus Doolittle, the student bell ringer and a future missionary to China, whose high moral character and sense of responsibility rendered him uncooperative. One of the sophomores, Moses Dunham, had become quite adept at hypnotism, and he found Doolittle to be a very impressionable subject. Once the bell ringer was incapacitated and his key obtained, a raiding party led by Joseph Hawley, a future Civil War general, U.S. senator, and governor of Connecticut, climbed the belfry, snatched the bell and hit it under an immense pile of cobblestones. Hence, another sophomore class remained rusty, to its undying shame.” 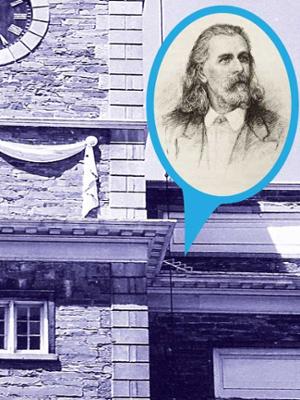 In addition to the Chapel’s bell, its weathervane also has proved an irresistible challenge to pranksters through the years. According to the article “The Eternal Sophomore: Tales of High Jinks on College Hill” that appeared in the Fall/Winter 1986 Hamilton Alumni Review, Henry Wheeler Shaw, Class of 1837, managed to climb all the way up to it and was promptly rewarded for his achievement with expulsion. So many others tried to duplicate his feat that the College authorities installed “Josh Billings spikes” at the cornice to fence off the steeple’s upper reaches.

The spikes were so named because Shaw went on to fame and some fortune as a leading American humorist who wrote under the folksy name of Josh Billings.

In the early days before intercollegiate athletics and extracurricular activities, debate and speaking contests lured students to the Chapel, and for many years students were required to complete four years of public speaking courses. As Clarence Aldridge ’45 noted in his half-century annalist letter, “Although most students complained about the four-year requirement, most alumni praised its everlasting value. The freshman course was known as Declamation. The student was required to stand on the platform in the Chapel before a class of 30 or more freshmen and heckling sophomores, and recite a speech from memory.

“It was a very nerve-racking exercise for most of us, and although the experience was indelibly impressed into memory, nobody can remember the speech — nobody, that is, except Charlie Lee ’45. He was so apprehensive and totally distraught over his first declamation that he ended up having an emergency appendectomy the night before. When Charlie came out of the anesthesia in the recovery room, he was heard reciting his speech. To this day, he can recite, word-for-word, the opening line, which was: ‘The fate of the American people rests more surely on our souls than on our weapons…’ I guess the moral of the story was, if you want to be sure to remember something, have your appendix removed.” 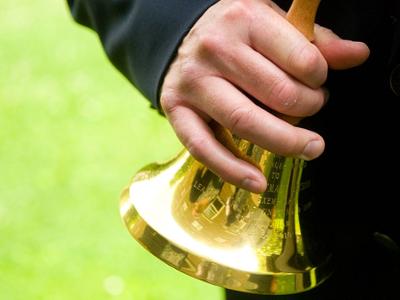 Since 1970, the Bell Ringer Award has been presented each year to a member of the Hamilton family in recognition of contributions made to the College, its alumni, and the community.
See all winners