The River Narrows Archeological Project in the Slocan Valley of British Columbia provides an understanding of human lifeways throughout 3,000 years in the upper Columbia River drainage of the interior Pacific Northwest. The project focuses on the Slocan Narrows archeological site, where Associate Professor of Anthropology Nathan Goodale, principal investigator for the project, has been teaching groups of Hamilton students since 2009. 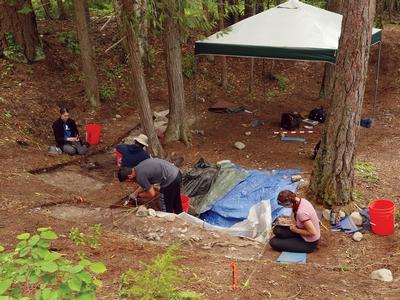 In the credit-bearing, eight-week field school, students live in a remote location where they build life skills, learn archeological field methods, and interact with the local community. Through on-site research, students consider connections between present-day people and their ancestral past, thereby exploring cultural diversity and civic engagement through interactions with indigenous people in the local community.

Many members of the indigenous group known as the Sinixt call Slocan Valley their ancestral territory and continue to live there despite the fact that the group was pronounced extinct in 1956 by the Canadian government. However, the Sinixt are recognized as part of the Colville Confederated Tribes in northeastern Washington and as part of the Okanagan Nation Alliance in west central British Columbia. As a result of the “extinction” declaration, most local community members maintain that indigenous people never lived in the area. Part of the Slocan Narrows Archeological Project involves public outreach and educating people. Despite its pithouse sites (historical dwellings), the upper Columbia River drainage landscape has been altered extensively as a result of hydroelectric dam construction. The Slocan Valley research site is located on one of the only undammed rivers in the upper Columbia system. Thus the river bottom remains similar to what it would have looked like in the past.

During each field school, the project team hosts a public education event at the site where students engage in teaching groups. Over the course of three to four hours, between 300 and 400 people learn about the research and archeological data through short presentations by students. Because one of the most frequent questions is, “What are you doing back at the lab at Hamilton with all the artifacts?”, Goodale formed a team to create a documentary that shows how the research in the field connects to the lab work, all in an effort to demonstrate the past human use of the site.

“This project is a huge team effort. I always find in my research that we bring a lot of different people together. We always produce a better product than if I was just sitting there spinning my wheels in my office by myself and trying to write articles or things like that. I always find that when you’re bringing multiple people in and having multiple voices in a project, you really produce a better product.”
— Associate Dean of Faculty and Associate Professor of Anthropology Nathan Goodale

The documentary, Archeology at the River Narrows, led by Petra Elfstrom ’18, fulfilled those public outreach educational goals. Goodale held a film screening and premiere in Nelson, British Columbia, in summer 2019 for the local community. The team has since released the film online, and five museums use the film in their permanent displays in the Slocan Valley region of British Columbia.

Lead Videographer/Video Editor
Petra Elfstrom, an archeology and creative writing major at Hamilton, attended the field school in 2016 and worked as lead videographer/video editor and documentarian of both field and lab components of the project for two years. In addition to making this film, Elfstrom completed a senior thesis on the geochemistry of the sediments from four of the pithouses that were excavated. She developed skills and experience in digital media, metadata, project management, and also learned the techniques and methods associated with geochemistry lab research instruments, interpreting data results, and connecting findings to what they meant in terms of how indigenous people were utilizing pithouses at Slocan Narrows in the past. All of these experiences aligned with Elfstrom’s interests and also furthered the long-term research and community outreach efforts of the project.

Video Support Specialist
Forrest Warner, video support specialist with Library & Information Technology Services, trained Elfstrom on videography and documentary film techniques. Warner also visited the field school to shoot video with remote-controlled drones. These visuals gave a sense of the field site at the river narrows and were combined with other data to create an even greater detailed image of the past.

Visually mapping the historical pithouse village sites is challenging because they are located within an interior rainforest in the Pacific Northwest. Dense tree canopy and satellites do not fly over southeastern British Columbia often. Even with the field school’s high-end military grade GPS (geographic positioning systems), gathering high-precision GPS data is difficult. In 2016, Goodale hired a Vancouver-based company to conduct a Light Detecting and Ranging (LIDAR) mapping of the Slocan Narrows area. LIDAR is a high-end laser scanner mounted under a Cessna airplane. That scanner can “see” through the tree canopy to obtain landscape formation data including a visual of the pithouses in the area. The resulting coordinate data (elevation, latitude, longitude) provides a three-dimensional visual of the topography.

Greg Lord, 3D modeler/animation and virtual reality developer, teamed with Elfstrom, Tewksbury, and Warner to combine the data into animations that corresponded to the GIS, visual, and archeological data. Working in a virtual reality to communicate what it actually looked and felt like in the past is difficult — although based on data, the results are still reconstructions that communicate what it might have been like to live in a pithouse or what the space inside might have been like in terms of light and space. These animations, combined with the LIDAR data, give audiences a sense of the history of the pithouse. Further work will be done with the LIDAR data to learn more.

Goodale describes the River Narrows research as multipronged with multiple outcomes. Hamilton’s promise to students is that they will get to study what they love. “There are many areas of coursework and different disciplines [students] may have never heard of before,” he says. “Most of the time anthropology is not something that’s traditionally taught in high school. For a student to use the open curriculum, to take a breadth of courses, to find those other areas that they may have not been exposed to, is a unique feature of Hamilton’s educational experience and so very important.”

Students are exposed to everything from the archeological research to a day learning Salish, a language traditionally spoken in this ancestral land. They experience a reconstructed pithouse at a site occupied by the “extinct” Sinixt and learn stories through oral traditions about past lifeways. The students are in a remote setting, camping, and cooking for themselves as a group. The learning is very active, yet also reflective through daily field notebooks and digital media documentation.

“It can be difficult in the classroom, even with smaller class sizes, to really get to know students and know what makes them tick,” Goodale adds. “Our students, even in the time that I’ve been here at Hamilton, are changing in the needs that they’re bringing with them to college. So having these kinds of high-impact practices, where you’re really getting to know students, can significantly help a faculty member shape a student’s future. You really get to have an impact in their lives and help them just by getting to know them.”