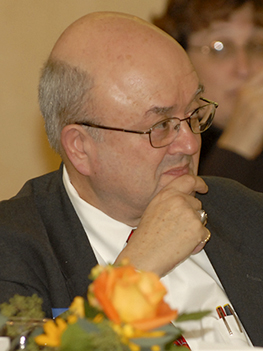 With the same loyalty, efficiency and dedication to a cause that characterized your service as a U.S. naval officer in Vietnam, you have served Hamilton for more than a quarter-­century. It is not a coincidence, then, that your tenure with the College coincided with a time of tremendous growth for Hamilton.

But whereas the public face of the College you love was represented by the four presidents and numerous deans with whom you worked, you remained in the background content to facilitate the ­interactions of others, as long as Hamilton was the beneficiary. Even as a donor, you often made gifts quietly in memory of those Hamiltonians and their family members you came to know.

In your role as director of development on College Hill you worked with trustees and colleagues to build a fundraising program that was — and still is — the envy of many. And you did it with an unparalleled work ethic characterized by 12-hour days and a penchant for persuasive prose that is, well, very Hamilton. Fortunately, penmanship didn't count.

Perhaps your greatest contributions to Hamilton over the years have been the numerous members of the Communications and Development staff you have patiently and painstakingly mentored. You instilled in them an appreciation for building relationships, the necessity for prompt follow-through and always, always, saying "thank you." Even when you moved to California to bring Hamilton closer to its Western alumni, the lessons you taught were very much a part of the day-to-day operations of the Anderson-Connell Alumni Center.

Your career at Hamilton has been about bringing people together, so it is fitting that we gather this evening to recognize the important role you have played in our lives and the life of our College. In recognition of your single-minded devotion to Hamilton, the Alumni Association takes great pride and pleasure in presenting you with its Distinguished Service Award.