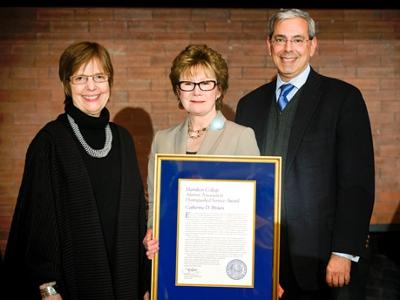 Effective graphic design requires not only creativity and artistic sensibility, but also the precision and practicality of an engineer. Beginning with your first project for Hamilton nearly twenty years ago as a freelancer and continuing through your nationally recognized work as Senior Director of Visual Communications, you have consistently delivered stunning print and digital graphics for the College.

From your childhood in Erie, Pennsylvania, to your foray into the hippie lifestyle as an art student in Albany, through your pioneering job as the first female machinist apprentice at General Electric, art has remained your passion. Your 3½-year apprenticeship included study in applied management engineering technology and shop theory, and led to certification as a tool and instrument maker at GE, the first woman to achieve that distinction. Throughout a 13-year career there, you rose to the management ranks, ultimately becoming production control specialist where you began to explore computer applications. When GE Schenectady began downsizing in the early 1980s, you switched your college night courses from industrial management to design.

You earned a degree in graphic design before leaving GE to begin a family and build your freelance design business. Hamilton’s Emerson Gallery was one of your early clients, and by the mid-1990s you were the go-to designer for the Communications and Development office. When a position opened at the College, you initially turned down the chance to interview for full-time employment; however, after the opportunity resurfaced several months later, you closed your freelance business and became Hamilton’s art director in 2002. Since then, you have elevated the College’s visual communications to precipitous heights, earning prestigious awards from the Council for Advancement and Support of Education and Graphic Design USA, among others. An active member of the Hamilton Arboretum Advisory Committee, you were selected in 2008 to receive the coveted Beverly S. and Eugene M. Tobin Employee Award.

Whether designing admission communications, the bicentennial timeline, the Alumni Review, digital media iconography, capital campaign materials, or assiduously protecting the College’s graphic identity, your creativity and professionalism touch the entire Hamilton community. The Alumni Association is deeply honored to present you with its Distinguished Service Award.