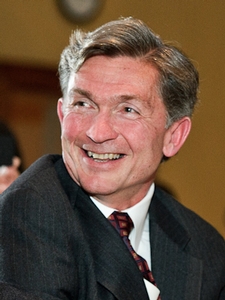 Anyone on College Hill interested in physical fitness or meeting any other personal health goal — whether it’s losing weight, lowering cholesterol or simply getting in better shape — knows immediately your teams earned Hamilton notice as a powerhouse in the pool. Throughout 19 seasons, you coached 123 qualifiers for the NCAA Division III championships and 49 all-Americans. In 2000, both teams won the New York State championships, the first time a coach had guided men’s and women’s teams to the title in the same year. More important to you than record-setting races or perfect dives, however, are the relationships with your students, many of whom remain in close contact with you. A few have gone on to become coaches themselves and say they aspire to reflect your passion and enthusiasm. One summed it up best: “We did not only work toward the goal of winning, but he led us to become better people.”

After four years as director of athletics and chair of the Physical Education Department, in 2006, you took on a broader role as director of campus wellness and the new Charlean and Wayland Blood Fitness and Dance Center. In addition to coordinating intramurals, club sports and physical education classes, you organize dozens of fitness programs, lectures, health screenings, blood drives and an annual wellness fair.

Last year you initiated the first Ham & Legs 5K Run/Walk, and this spring marks the 10th anniversary of the popular HamTrek sprint triathlon. These programs engage and unite the campus community and exemplify what you firmly believe — “happiness, performance and quality of life on the Hill are surely tied to the level of our collective health.”

In 2009, Hamilton presented you with the Jerome Gottlieb ’64 Fellowship for Exemplary Coaching, recognizing a dedicated teacher, exceptional mentor and role model. The Alumni Association seconds that honor today by proudly presenting you with its Distinguished Service Award.