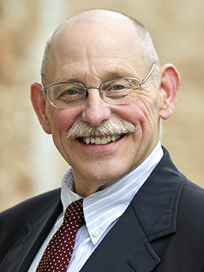 Since the moment you arrived as an assistant professor of English in 1972 to this very day, you have, with enthusiasm, sensitivity, aplomb and a ruthless insistence on clarity and grace, wrung the best writing and analysis possible from your students. Known not only as a caring taskmaster but as "The Smiling Screw" for your reputation of giving lower grades than most students expect on their papers, you "don't mince words" when it comes to helping students focus their sometimes fuzzy use of the English language. You've inspired them, cajoled them, encouraged them and, when necessary, coerced them during your nearly three decades on the Hill. You push your students, and they love you for it. They know you care deeply — not only about the English language, but about their futures and about them personally, each and every one.

Similarly, you have had enormous influence on the way writing is taught across the disciplines at Hamilton. You played a defining role in the establishment of the Nesbitt-Johnston Writing Center and served as its founding director from 1987 to 1990, and again from 1994 to 1999. You have led by example through your many publications about the literature of Restoration England, including articles on verse satire, Royal Court poetry and your book on George Villiers, the Second Duke of Buckingham. For the past decade, as editor of the Scriblerian, a journal devoted to the study of British literature and ­culture of the late 17th and early 18th centuries, you have offered your expertise to writers and scholars from around the globe.

Understanding that access to a quality education should be the right of everyone regardless of ­economics, you have remained a champion of the Hamilton's Opportunities Program for as long as you've graced this campus. In addition, you are the Edmund A. LeFevre Professor of English Emeritus, have chaired the English Department, directed the Senior Fellowship Program and served as College Marshall.

In recognition of your lasting impact on students' lives both in and out of the classroom, during their time on the Hill and beyond, the Alumni Association is pleased to present you with its Distinguished Service Award.