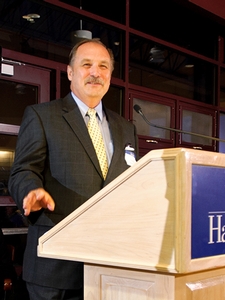 Giving back is in the DNA of Hamilton alumni, or so a remarkable alumnus once said. We can look to you today as proof of your own observation, which you made in 2009 as chair of an annual fund campaign that succeeded despite the Great Recession. President Joan Hinde Stewart has called you the “embodiment of love and loyalty to this institution.”

Your volunteer work stretches back more than 30 years, from College Hill to Capitol Hill, where you have made a distinguished career in law and lobbying. Your real-world knowledge and professional achievements have inspired countless students, whether they’ve visited you in Washington or participated in the classes you’ve taught on campus. You’ve become known as a “godfather” to Hamilton students looking for internships and to newly minted Hamilton graduates pursuing careers in Washington. You’ve helped launch students you’ve never met through your guidance in shaping the “best-in-class” Hamilton Career Center, where you continue to advise staff on initiatives and programming.

And then there’s the impact you’ve had on your fellow alumni and Hamilton supporters. In a range of roles, you have motivated them to awesome generosity and action on behalf of the College. You’ve hosted Hamilton events in Washington since the 1980s and served as president of the Alumni Association, chair of the Alumni Council and Alumni Trustee, to name just some of your efforts.

You can even claim a coast-to-coast party as part of your Hamilton legacy. Thanks to a creative idea you had in 2001, when you were Alumni Association president, the Hamilton community near and far celebrates Alexander Hamilton’s birthday each January 11.

Your concern and high expectations for Hamilton students come through in actions and words. You’ve said Hamilton grads who want to carve out a career in lobbying are “limited only by their own ingenuity, ambition and drive.” For the unlimited ingenuity, ambition and drive you have shown in support of Hamilton, the Alumni Association presents you with its Volunteer of the Year Award.