2008 Volunteer of the Year Award 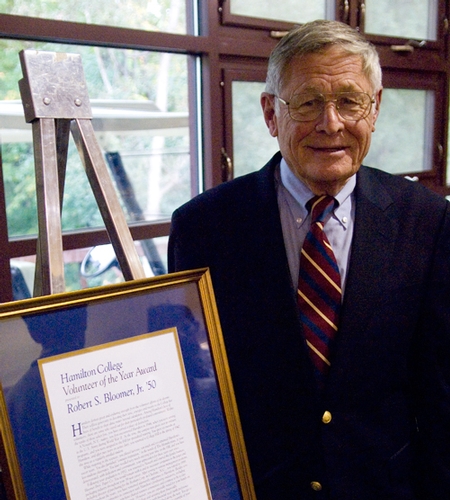 Hamilton derives great and enduring strength from the volunteer efforts of its alumni. Their selfless generosity in devoting their time, energies and means to the College has been of benefit to their alma mater beyond calculation. Among Hamilton’s host of volunteers, there are some who stand out for their particularly profound commitment. Within the ranks of those select few, you have earned a place of distinction.

A Newark, N.Y., native, you first encountered Hamilton in 1944, when you were serving in the U.S. Army during World War II. At the time, the campus was given over to military programs, and you were assigned to the Hill for specialized training. You spent six months at Hamilton, and after two years on active duty, you returned to College Hill in the spring of 1947, this time as a regularly enrolled student.

While majoring in the sciences, you played lacrosse, ran track and co-captained Hamilton’s soccer team. You also furnished “constant inspiration,” in the words of The Hamiltonian, to your less-studious classmates. You later recalled very much enjoying your time on the Hill, and you have demonstrated, with dedication and commitment, your appreciation for those years ever since.

Following your graduation in 1950, you returned to Newark and entered the family business, Bloomer Bros. Paper Co. You would remain with it and its successor companies in the paper and packaging industry throughout your 39-year career. After serving in various management positions, including director of purchasing for the Rexham Corp. in Charlotte, N.C., you retired in 1989.

Throughout the years, you have remained adamantly supportive to Hamilton. Besides serving in numerous capacities in connection with Hamilton’s fundraising endeavors, including several capital campaigns, you have chaired reunion committees and continue to be a class correspondent for the Alumni Review. However, you are especially noted for your hands-on involvement in recruiting students for the College and assisting them financially.

Through the Bloomer Family Scholarship, students with financial need (with preference given to those from Newark and Wayne County, N.Y.) are helped along the way. You get to know the Bloomer Scholars and their families personally, which is just one example of your boundless energy and enthusiasm in promoting Hamilton and furthering its interests.

In grateful recognition of your loyalty and dedication to the College, and your many contributions to its benefit, the Alumni Association takes great pleasure in conferring on you the Volunteer of the Year Award.