2004 Volunteer of the Year Award 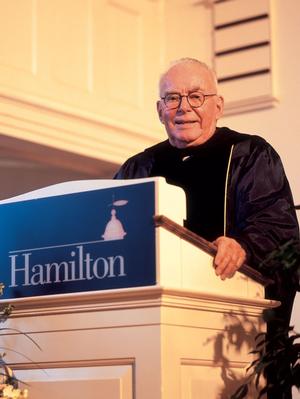 For you, a sixth-generation Hamiltonian, the College has always been an integral part of your life. Far beyond mere sentimental attachment, however, your devotion to Hamilton has been unfailing, unstinting and exemplary in every way and to this very day.

You began your personal association with the College as a pea-green freshman in the Class of 1944. Soon, however, your education was interrupted by military service during World War II. After returning to the Hill, you graduated Phi Beta Kappa and with honors in Greek and history in 1947. Fifteen years later, following a detour into the insurance field, you were again back on the Hill to begin a long, fruitful and distinguished career in educational administration, first as vice president of the College and subsequently as its acting president.

Beginning in 1969, your career took you to Albany as New York State's first deputy commissioner for higher education, to New York City as the first full-time president and chief executive officer of the New York Public Library, and to Princeton as president of the Woodrow Wilson National Fellowship Foundation. After your retirement in 1990, you and Patsy, your enthusiastic partner in commitment to Hamilton as well as in life, decided to make your home on the Hill, where you have remained close to the College, both literally and in your dedication, ever since.

Your services to Hamilton, now extending more than 60 years, have encompassed virtually every volunteer activity, whether major or minor. They have included leadership roles in all capital campaigns since 1950 and chairing the Alumni Fund as well as serving on the Alumni Council. Elected an Alumni Trustee in 1959 and a Charter Trustee in 1967, you served actively, diligently and effectively on Hamilton's board. Today, as a Life Trustee, you continue to offer the College wise and astute counsel and guidance. In addition, you and Patsy have generously served the College and your class in countless other capacities, such as hospitably hosting reunion receptions and dinners in your home.

In grateful recognition of, and profound appreciation for, your ardent commitment and enduring contributions to Hamilton, the Alumni Council, on behalf of the Alumni Association, takes great pleasure in presenting you with its Volunteer of the Year Award.