2006 Volunteer of the Year Award 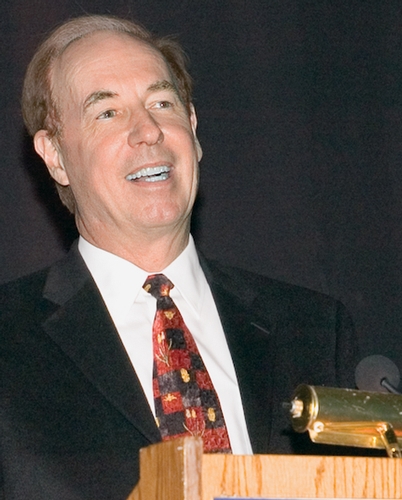 Hamilton derives continuing strength from the volunteer efforts of its alumni. In countless ways, and with selfless generosity, they have dedicated their time, talents and means to the service of their alma mater. Hamilton has been sustained and is flourishing today as a result. Among the College’s host of volunteers, a few stand out, not only for their leadership but particularly for their profound commitment. Through your dedicated efforts for more than two decades, you have unquestionably earned a premier place within their ranks.

A native of Rochester, New York, you first encountered Hamilton as a member of the Class of 1967. On the Hill you also soon encountered Professors Sidney Wertimer and Martin Carovano, who introduced you to economics and the mysteries of financial markets. That introduction greatly influenced your future career path, and having majored in economics as well as Spanish, you went on to acquire an M.B.A. degree from Cornell.

Soon thereafter, you headed to Wall Street to make money “the old-fashioned way” as an assistant portfolio manager for Smith Barney. Moves to Texas and Minnesota followed, first as vice president and director of research for American General Capital Management, and subsequently for First Bank Minneapolis. You were director of equity investments for the IBM Retirement Fund when, in 1986, you struck out on your own, utilizing your entrepreneurial skills as managing director of Sasco Capital, the investment management firm you had founded.

By that time you had also begun to take an active role as a volunteer on Hamilton’s behalf. Elected as an Alumni Trustee in 1988 and a Charter Trustee in 1992, you chaired or co-chaired the board’s investment committee for more than a decade. During that period, thanks in large part to your leadership, financial expertise and acumen, the College’s endowment increased almost threefold. Although now a Life Trustee residing in distant Arizona, you continue to be concerned with Hamilton’s financial welfare as an investment committee member.

Through the years, you have also contributed your volunteer efforts to virtually every Hamilton fundraising program, from free agent for the Annual Fund to committee service in capital campaigns. And you have generously aided the College with your own funds, including endowment of a scholarship for student benefit.

You once observed that your increasing involvement with Hamilton stemmed from a growing appreciation of its role in preparing you for your entrepreneurial journey. We take pride in saluting your many successes during that journey’s course, and we are deeply grateful for your loyalty and dedication, from which Hamilton has derived great and lasting benefit.