1999 Volunteer of the Year Award 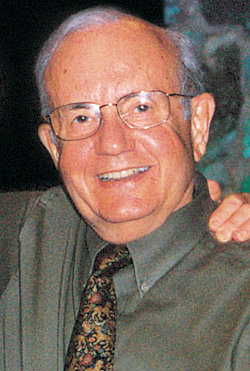 Volunteerism is the strength and sinew of Hamilton. The commitment of time, talent, and energy by alumni and other friends provides a precious resource for the College. As a small token of our recognition and expression of profound gratitude for such services to Hamilton and its alumni body, the Alumni Council, on behalf of the Alumni Association, has created the Volunteer of the Year Award. In selecting the inaugural recipient of the award, one name immediately leaped to many minds, that of Don Seyba, or to use your cyberspace handle, familiar to all denizens of the Alumni Center and any of your classmates who are wired in, “Cactus Don.”

A native of Rochester, NY, you came to know the College in the era of the North Village, built on the edge of the campus for ex-GIs and their families in the wake of World War II. In fact, you, by then a Korean War vet, and your wife Kay were living in the Village when your first child was born. After 28 years of working in marketing with IBM, which took you abroad on assignments in Europe and, for the final four years, with Kay in Japan, you retired in 1989. A few years later, having grown weary of Connecticut winters, the two of you moved to Arizona.

Finding yourself blessed with abundant energy in Sun City West, you looked for ways of channeling it constructively and to good effect. It is Hamilton's good fortune that you had something of an epiphany while attending your 40th Reunion and not only willingly but enthusiastically volunteered for the job of class president, an act of self-sacrifice that is virtually without precedent.

In the two years since, you have put out a class newsletter, helping to rekindle class camaraderie and bind its members closer to the College; gone beyond the call of duty to boost the Annual Fund, utilizing all your considerable persuasive wiles; organized two special programs on the Hill for your classmates to acquaint them with Hamilton today; and taken the lead in fund-raising efforts on behalf of Hamilton's newest varsity sport, crew, rallying your class behind the project.

If that were not enough, you and Kay have graciously and generously hosted the Phoenix-area alumni association several times at your home, and you have organized other local activities, including an informal mentoring program of older alumni connecting with and assisting younger alumni who move to that area. Someone has credited you with an idea a minute, and we are grateful that, with your driving energy behind them, so many have been translated into reality.