2000 Volunteer of the Year Award 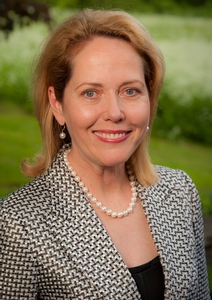 Throughout the past 25 years, Hamilton and Kirkland have each had their share of enthusiastic volunteers and supporters, but very few have been as devoted to the ideals of both colleges as Susan Skerritt.

A native of Rochester, NY, you came to the Hill in 1973 where, as one of Kirkland’s few economics majors, you soon became familiar with both the Hamilton and Kirkland classroom experiences. In 1984, you earned your M.B.A. degree from New York University and went to ?work for Morgan Stanley before becoming a partner at Treasury Strategies, Inc., where you are currently charged with building the firm’s New York operation.

Despite a demanding career, you never ceased to find time to devote to Hamilton. Exercising your executive skills, you served as the first woman president of the College’s Alumni Council from 1992-94 and as a member of the Board of Trustees from 1994-98. Your service to the College has crossed the spectrum, ranging from participation with the Admissions Volunteer program, the Reunion Gift Committee, the Annual Fund Top Prospect Committee and the Career Center Volunteer Program.

Most recently, as co-chair of regional events for The New Century Campaign, you literally traveled the country on Hamilton’s behalf, visiting a dozen cities from Los Angeles to New York. At each alumni gathering, you spoke eloquently and convincingly about campaign priorities and the impact they will have on the College’s strong liberal arts tradition that you so firmly believe in.

While seeing Hamilton succeed is important to you, so is your commitment to keeping the Kirkland legacy alive on campus today. You have been a champion for Kirkland women, serving on several committees and devoting much time and energy to finding ways to keep alumnae connected to the Hill and each other.

You once said that as a Kirkland alumna, you feel heartened by the ways in which Hamilton has evolved through Kirkland’s influence. Likewise, we are grateful for your driving influence and energy, and thank you for your tireless work on behalf of both colleges.

As a small token of our recognition and expression of gratitude for your service to Hamilton and Kirkland, the Alumni Council, on behalf of the Alumni Association, presents to you the Volunteer of the Year Award.