2002 Volunteer of the Year Award 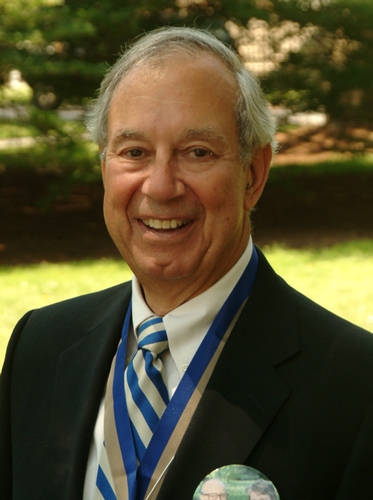 Loyalty to and affection for our college has inspired innumerable alumni to volunteer on its behalf. In myriad ways they have devoted their time and talent to Hamilton with no recompense except personal satisfaction and perhaps an occasional pat on the back. Their contributions in the aggregate have tremendously strengthened the College and done much to create the flourishing institution that Hamilton is today.

Within the ranks of Hamilton’s legions of volunteers are those who provide the leadership, and among that select group you have been unquestionably in the first rank. For example, when the Alumni Council created the Volunteer of the Year Award, it was part of an overall effort to increase volunteer participation and recognize achievement beyond a mere pat on the back. And the driving force behind that effort was the Alumni Association’s then president, you.

You began your journey toward Hamilton alumnihood when you arrived on College Hill from your native New Jersey in 1951. Our sources tell us that, while you were no stranger to a good time on campus, you were already giving hint of your management skills as president of DU. After leaving the Hill and obtaining an M.B.A. from Cornell, and a brief detour into the U.S. Army, you began your corporate career. Joining J.C. Penney Co. in 1962, you later became its director of human resource development, responsible for the training and development activities of all its many employees. However, when the company announced its move to Dallas in 1987, you decided that, instead of becoming a Texan, you would launch your own management consulting firm. By that time, you were national president of the 50,000-member American Society for Training and Development, the author of numerous books on management, and a recognized authority in the field.

From your home in Upper Saddle River, NJ, where you have served as president of the Historical Society and the Library Board, you also generously volunteered your energies and expertise to Hamilton. Above all, as president of the Alumni Association from 1997 to 2000, you were instrumental in restructuring the Alumni Council, having taken the lead in the revision of governing documents, and, in general, prodding the process along to completion. With patience and humor, but with goals and objectives firmly fixed in mind, you succeeded in the task of revitalizing the Council and its committees, and breathing new life into the Association as a whole.

On more than one occasion, you have credited Hamilton for its contributions to the enrichment of your life. Through your own many and lasting contributions, you have abundantly recompensed the College, and all Hamiltonians heartily salute you for your dedication and achievements.