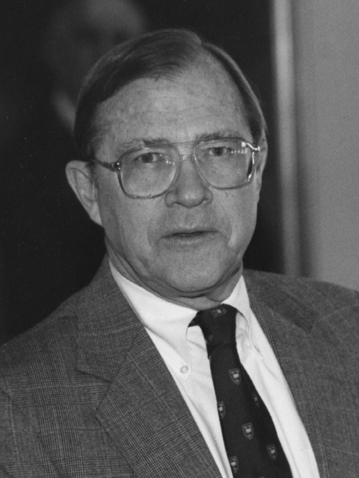 In 1953, as a graduating senior, you were credited by the College yearbook as “Inspired by a deep love for Hamilton, a sincere enthusiasm for all things Hamiltonian, and the energy to do something about it.” More than a half-century later, those words ring ever true.

As an undergraduate, your enthusiasm and energy propelled you to participate in an impressive variety of extracurricular activities, from associate editor of The Spectator and president of the Chapel Board to co-captain of the swimming team and head manager of the football squad. Tapped by Pentagon, you also excelled academically, earning a Phi Beta Kappa key.

Following your graduation and two years in a U.S. Army uniform, you acquired your LL.B. degree from Yale Law School. After practicing general corporate law with a small firm in New York City, you joined the law department of the Columbia Broadcasting System, where you rose to the posts of corporation secretary and associate general counsel.

In 1988, you left CBS to embark upon a highly satisfying new career in the classroom, teaching American history to 11th and 12th graders at your old alma mater, Hackley School. Sharing your enthusiasm with young people proved challenging and rewarding, and consumed your energy until your second retirement in 1999. Today, you ­continue to channel that ­energy toward ever broadening your knowledge through your favorite pastime, reading, as well as travel.

Throughout the years, you have unfailingly and generously extended your enthusiasm and energy to Hamilton. Besides serving as an alumni trustee of the College from 1975 to 1979, you have been actively involved with the Annual Fund and a number of capital campaigns. You also served as president of your class and as a member of the Alumni Council. And your unbounded affection for the College is found not only in your deeds but in your words, as warmly reflected in your Half-Century Annalist’s Letter, delivered in 2003.

For your enthusiastic and energetic dedication to Hamilton, both in deed and in word, your fellow alumni are deeply appreciative. As a token of that appreciation, we take great pleasure in presenting you with the Bell Ringer Award.
Citation presented b
Citation presented by
Mark Rice ’73, P’01,’06
President, Alumni Association
June 7, 2009