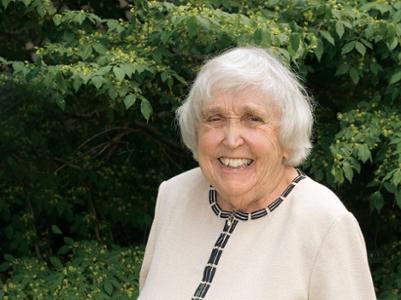 Elizabeth McCormack was a trustee on College Hill for nearly half her life, beginning in 1975 for Kirkland College, and then for Hamilton from 1978 until her death in 2020. Few people have served as long and as influentially, and few have helped transform the organizations and professions with which they were associated.

Elizabeth brought to Kirkland and Hamilton a firm belief in the importance of a liberal arts education and a broad range of experience. She advised six Kirkland and Hamilton presidents, the three most recent calling her “wise forthright, and unfailingly supportive,” “universally respected and widely admired,” and a person of “unmatched life experiences at the highest levels of higher education and philanthropy.”

In 2012, No Ordinary Life: The Biography of Elizabeth J. McCormack, was published on the occasion of her 90th birthday. In it, Elizabeth was described as someone “who always pushed boundaries, becoming a force of nature in the field of philanthropy, a pioneer as a woman in fields dominated by men, and a catalyst for change to improve institutions so as to make them vibrant, relevant and effective.” In one review, she was called “the very soul of philanthropy.” She was, for those who knew her at Hamilton, both role model and cherished trustee.

Elizabeth graduated in 1944 from Manhattanville College, received a master’s degree from Providence College, and was awarded a Ph.D. from Fordham University. She joined the Society of the Sacred Heart and in 1966 was named president of Manhattanville, which was transformed during her tenure from a traditional Catholic women’s college to a nonsectarian coeducational institution. She later became a philanthropic and educational advisor to the Rockefeller family and served on the board of the John D. and Catherine T. MacArthur Foundation, among others.

On the 40th anniversary of Elizabeth’s service to Kirkland and Hamilton in 2015, President Stewart announced a new award, named it for Elizabeth, and fittingly designated her its first recipient. The Elizabeth J. McCormack Presidential Counselor Award is given at the discretion of the president to “an advisor of uncommon generosity, wisdom, and influence.”

Elizabeth died one month after learning she would receive the Bell Ringer Award, the Alumni Association’s highest honor. We remember her today, and always, for her generous spirit, uncommon wisdom, perceptive discernment, and intellectual and moral leadership.