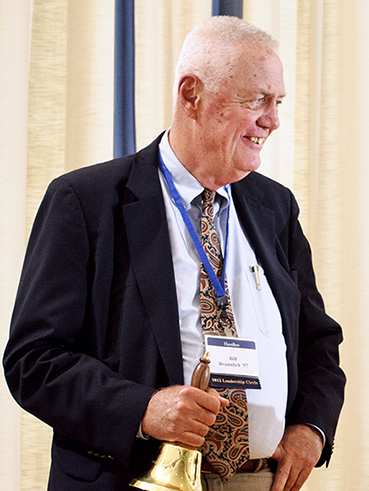 It’s no surprise that the 1957 Hamiltonian described you as the “paragon of ‘the Hamilton man.’” After all, when you followed your older brother Bob to the Hill from Staten Island in 1953, Hamilton was the only college you had considered. You took a leadership role on campus as president of Delta Phi and a member of the Interfraternity Council.

After graduating with a degree in history and economics, you began your career with New York Telephone before entering Officer Candidate School and serving six years in the U.S. Navy. Following active duty, you were a member of the Naval Reserve for 23 years, retiring as a commander. In 1975, you earned an M.B.A. at New York University and resumed your career, becoming the first chief operating officer of the NYNEX Yellow Pages in 1984. Several years later you took over as president of Volt Telecommunications Group, a firm involved in engineering, installation and maintenance of telephone infrastructure.

After retiring in 2006, you devoted more of your time to a life-long mission — advancing research and awareness about epilepsy. You served as chair of the Epilepsy Foundation of America and as president of the Epilepsy Therapy Development Project. A special moment came when your daughter Heidi was featured in a PBS special that told the stories of people living with the condition.

You credit Hamilton with providing the underpinning for your professional success and leadership abilities, and throughout your life you never missed an opportunity to give back. You served on the Alumni Council, as class president and class agent, 50th reunion gift chair, and as a volunteer for the Career Center and numerous capital campaigns. A member of the Joel Bristol Associates, you established the Robert Gustav Braunlich III ’55 Scholarship in memory of your brother.

Bill Braunlich, you once said that you are willing to do anything for Hamilton, and your alma mater certainly took you up on that offer. It is with great pride and gratitude that the Alumni Association salutes you today with its Bell Ringer Award.