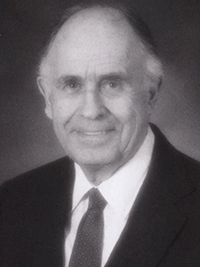 A New Englander born and bred, you entered the U.S. Army long before the clouds of World War II had gathered over our nation. Commissioned as an officer, you served throughout that conflict, and found yourself on College Hill in 1946, among the many returning veterans swelling student ranks in pursuit of higher education. The Hamiltonian assures us that you were best known on the Hill as a terrific swimmer, but better known to your intimates as a tough man in any argument. We cannot vouch for the accuracy of the latter, but as to swimming, the records are readily available, attesting to your pool performances, including two years as varsity team captain.

After graduation in 1950, you began 33 years of public service, most of it with the New York State Division of Parole, from which you retired as an area supervisor. At the same time you were active in community volunteer work, for the YMCA and the United Way, and for the American Heart Association. You also continued to swim, both recreationally and competitively, in connection with the Masters program.

Additionally through the years, you have been preeminent among volunteers for Hamilton. No matter what you were called upon to do, you readily and enthusiastically stepped forward. The list of your many contributions to the College and to your class is long, and includes class agent, free agent, and reunion gift chair for the Annual Fund, as well as capital campaign volunteer and ­member of the Alumni Council. For the past dozen years you have also taken on the task of  class correspondent, reporting on the news of ’50 for the Alumni Review.

Known as a motivator, and for your thoughtful personal touch, you bring a genuine commitment to your efforts on behalf of your classmates and the College. You once remarked that you thought Hamilton did a terrific job of holding alumni together and of fostering a spirit of belonging. If this  is indeed true, and we certainly think it is, the credit goes to a host of willing alumni volunteers, and you foremost among them.