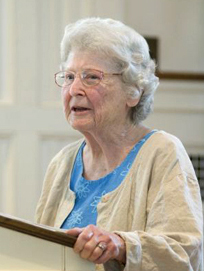 Hamilton is much more than a collection of buildings with brick facades, scattered around a Chapel on a hill. It is above all made up of people who, over many generations, have devoted themselves to its advancement and well-being. Some of the most truly dedicated have held no paying positions with the College, but instead have developed their affection for Hamilton through familial ties and long and active participation in its campus life. You, in ­countless ways, exemplify such affection and dedication.

You first came to College Hill in 1946 as a bride, accompanying your husband, Dick Couper ’44, who, along with many other GIs, had returned to Hamilton after World War II. Less than 20 years later, you were back on the Hill when Dick served his alma mater as administrative vice president and subsequently as acting president. After his retirement in 1990, the two of you returned once again to the Hill, where you built a home and soon became a vital part of the College community.

Throughout the years, in partnership, you and Dick played a key role in creating and sustaining the Williams-Watrous-Couper Fund, which provides support for faculty research and teaching improvement at Hamilton. You have also endowed the chair of Couper Librarian and supported in many other ways the College’s library and its collections. In addition, your benefactions have extended to the communities beyond College Hill, especially through your support of the Kirkland Town Library and the Oneida County Historical Society.

Beyond the generosity of your means, however, you have unhesitatingly offered your hospitality to Hamilton’s students, faculty members and alumni. And especially on Reunion Weekends you have warmly welcomed into your home not only members of the Class of 1944 but many other Hamiltonians as well.

Ever gracious, positive and encouraging to newcomers to College Hill, you assured our ­president, Joan Hinde Stewart, upon her arrival, that “Hamilton has heart.” With your enthusiastic commitment to the College and your lively presence in its life, you have abundantly demonstrated that you too have great heart. Patsy Couper, as a token of our appreciation for all you have contributed to Hamilton, both in heart and in soul, we take great pleasure in presenting you with the Bell Ringer Award.