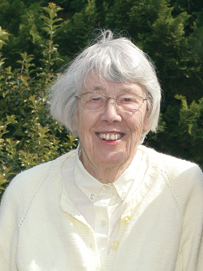 Hamilton has long prided itself on encouraging its students not only to acquire  knowledge but also to enjoy physical activity and attain athletic skills that will ­provide lifetime satisfaction. The College gives students the opportunity to participate in  a wide variety of intramural and intercollegiate sports, and there are today no fewer than  26 varsity teams, 13 for men and 13 for women. The women’s athletic program began as soon as Hamilton became coeducational in 1978, but much of the groundwork had already been laid, thanks in large part to your personal efforts over the previous decade.

When Kirkland College opened its doors in 1968, it had no athletic program, nor was one even contemplated. However, the members of Kirkland’s Charter Class, who had roughed it through a crazy winter wearing their hard hats in the midst of campus construction, soon demanded a program of physical as well as cerebral education. In response, you were asked in 1969 to take on the task of coordinating Kirkland’s sports activities.

A part of the College Hill community since 1952, when you came to Clinton with your husband, Channing B. Richardson, newly appointed to Hamilton’s faculty, you were well acquainted with the scene and the key players in it. You quickly recruited support from Hamilton’s athletic department and, despite limited facilities and inadequate staff, managed to create a program of instruction. Aided by increasing student enthusiasm, the program steadily developed to include intercollegiate teams, and you yourself coached tennis, Kirkland’s first ­varsity sport.

In the year prior to the merger of Kirkland and Hamilton, you were instrumental in formulating a coeducational athletic program that incorporated much of the Kirkland ­experience. Drawing upon it, Hamilton was able to offer four varsity sports for women,  all with full intercollegiate schedules, during the very first year of coeducation. By the time you retired in 1982 as assistant professor of physical education and associate director of athletics, women’s sports were not only well established at Hamilton but flourishing.

On this special occasion of the 25th Reunion of Kirkland College’s Charter Class,  we take particular pleasure in saluting you who did so much to create and nurture women’s athletics on College Hill, for it was your pioneering efforts that paved the way for the program in which Hamilton takes such great and justifiable pride today.