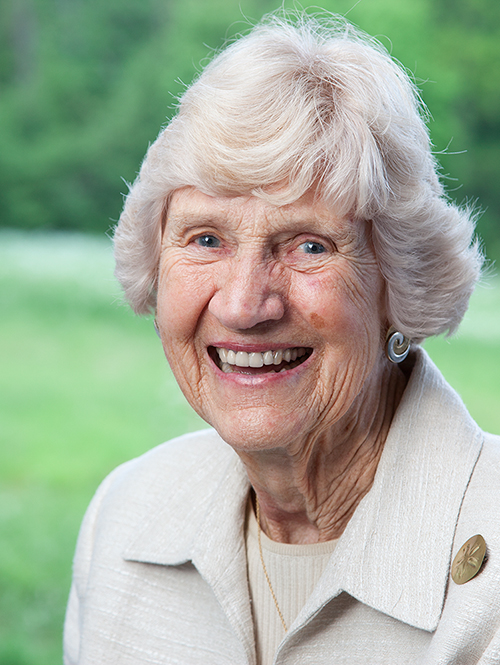 The Ferguson family ties to Hamilton College span more than 140 years, crossing generations and benefitting countless students and faculty members. You continue a bond that began with your grandfather, Daniel Ferguson, a graduate of the Class of 1871. His son — your father — Leonard, Class of 1919, served as president of the Alumni Association and on the Board of Trustees. Following in his footsteps were your brothers Rodger, who graduated in 1947, and Dan, Class of 1948. All told, 11 Ferguson family members earned degrees on the Hill, and all but one became members of Delta Upsilon fraternity. When the former Delta Upsilon house was renovated in 1998, it was fittingly dedicated as Ferguson House in honor of your parents.

After earning your degree from Stanford University in 1950, you lived for many years in Akron, Ohio, where you and Bob Seeley raised your three children. You were active in your community, serving as a board member for the Girl Scouts, the Akron chapter of DAR and your church. Today, you divide your time between Naples, Florida, and Oak Point, New York, and continue work with the Naples Philharmonic, the Conservancy of Southwest Florida and as a board member of the Antique Boat Museum on the St. Lawrence River. You also spend time traveling, often with family and always incorporating an educational component to quench your lifelong desire to learn and discover new things.

Forever proud of your family’s ties to Hamilton — including the legacy that continues with your granddaughter Katherine Sanford Hayse, Class of 2017 — you joined the board as a charter trustee in 1992 and continue as a life trustee today. Because you established the Ferguson-Seeley Faculty Innovation Fund, countless students and professors have increased opportunities to collaborate on research. Your family’s remarkable generosity includes endowments for a professorship, two student scholarships and support for oral communication initiatives and the arts.

Following your father’s death in 1975, your mother, Mildred, continued the family’s commitment to the College, and, in 1987, she received the Bell Ringer Award in recognition of her contributions. Like mother, like daughter, today we take equally great pleasure in honoring you, Nancy Ferguson Seeley, for your role in perpetuating a truly wonderful family connection to Hamilton.