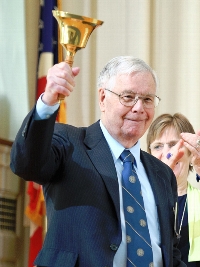 As an expert on the Uniform Commercial Code, you chaired committees that wrote many uniform laws and earned a gubernatorial appointment to the National Conference of Commissioners on Uniform State Laws, serving as president from 1983 to 1985. You’ve been a frequent writer and speaker on e-commerce law and Internet transactions, and have been listed in The Best Lawyers in America since 2001. Active in your community, you served on the school board in Alexandria, Virginia, including a period as chair. You were also a member of the City Council and the Redevelopment and Housing Authority. In recognition of those civic contributions, you were named a “Living Legend of Alexandria” in 2011.

Official retirement notwithstanding, you devote much of your time to pro-bono work on housing issues. Your family life remains full as well. You and your wife, Jane, raised four children — including John “Roddy” Ring ’87 — and now delight in time with your eight grandchildren.

Throughout the years, as you’ve balanced devotion to family with career and public service, you’ve been a steadfast friend to your alma mater. As longtime class agent, you have done a remarkable job reaching out to classmates. For your 60th reunion, you and Jane created Our Stories, a book about the Class of 1953. In 2003, your success as chair of your class Reunion Gift Committee earned you the Annual Fund Chairman’s Award, and you were quick to step up when the Planned Giving Committee, Reunion Planning Committee and the Levitt Center needed volunteers. Returning to the Hill often for Alumni Council meetings, you provided valuable advice on a new governing document for the council and the Alumni Association.

Connie Ring, you have noted on more than one occasion how your Hamilton education has served you well throughout your life. It gives the Alumni Association great honor to recognize you for all you have given back. We are honored to present you with the 2015 Bell Ringer Award.