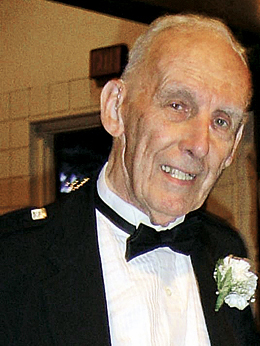 There are those committed to a cause and others who strive for nothing short of ­perfection. Your work on behalf of Hamilton’s Annual Fund places you in both categories.

You came to Hamilton from Newburgh Free Academy in the midst of the Great Depression. A chemistry major, you joined Squires Club and the band, and you worked in the faculty club. After leaving the Hill, you earned your master’s degree at Columbia University and embarked on a lifelong career teaching science. Along the way, your ­affection for and devotion to your alma mater never faded. A member of the Alumni Council and president of the Class of 1940, you have served as a class agent since 1980. In honor of your class’s 60th reunion in 2000, you convinced every one of your classmates to make a gift to the College. That string of 100 percent participation has now extended a remarkable 10 years.

But it hasn’t always been easy. In 2001, you found yourself one gift short as the deadline approached. That’s when you hopped in your car in Walden, New York, and drove north to Watertown — near the Canadian border — to search out the one classmate you had been unable to reach by phone. After a lovely visit, you collected that final gift and drove to Clinton so you could deposit the check at the Clinton Post Office, guaranteeing that it would arrive on time. Giving new meaning to the phrase “burning the midnight oil,” you drove home through the night, covering more than 600 miles in all. You also are known to write letters to your classmates, keeping them up-to-date on happenings at the College and in touch with each other. It’s no wonder they are unanimous in their response when Hamilton calls.

Although seven decades have passed, you vividly recall walking out of the Chapel after your Hamilton graduation, thinking, “I’m sure I came to the right place.” Eldred Ross, we could not agree more. With profound appreciation for your tireless efforts on behalf of the College, the Alumni Association is delighted to present you with the Bell Ringer Award.