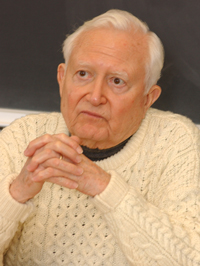 You came to College Hill with the Class of 1944, but like most of your classmates, you were caught up in the turmoil of World War II. Your studies set aside for military service, you entered the U.S. Army. Trained in military intelligence, you spent the remainder of the war getting acquainted with a combat-ravaged Europe. In 1949, two years after returning to the Hill and obtaining your degree, you reentered the world of intelligence with the CIA.

For 27 years until your retirement in 1972 to try your hand in the private sector, you ran or managed hush-hush CIA operations, mostly in Europe, where your linguistic skills in French and German came into play. Along the way, you developed an enduring affection for the continent,  and especially France, as well as a taste for wines with fine bouquet.

Soon, having discovered that life in the private sector wasn’t much fun, you again retired and, while living in Washington, devoted your spare time to volunteer work with the Smithsonian Institution. You also reconnected with Hamilton. Enthusiastic in your commitment, you became involved in alumni affairs as a fund-raiser for capital campaigns, as a member of the Alumni Council and, above all, as a class correspondent for the Alumni Review.

As correspondent for more than 20 years now, you have not only consistently lent literary ­distinction to the Class Notes section of the Review, but have also gone well beyond routine in keeping in touch with your classmates. By diligently serving as liaison among them, you have ­provided the vital link between the class and College Hill. Beyond that, you have edited with rare conscientiousness the reunion yearbooks for your class as well as chairing its 50th Reunion. And your ardent advocacy of the Alumni Review and passion for improving it as the primary vehicle of alumni communication are additional evidence of your dedication.

On this, the occasion of the 60th Reunion of your class, whose members have done so much for Hamilton in so many ways, it is fitting that we recognize the one who has, more than any other, provided the glue that for more than two decades has kept the class together in its loyalty. On behalf of your fellow alumni, we thank you, and we take great pleasure in presenting you with the Bell Ringer Award for 2004.