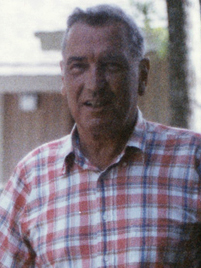 A native of Brooklyn but a New Englander by choice, you followed your father to Hamilton 50 years ago this fall. Not long after Pearl Harbor, you put aside your football uniform and track suit to join the U.S. Coast Guard. By that time, your father, Carl Wenigmann, Class of 1913, had taken the lead in launching Hamilton’s modern Alumni Fund. Following the war, you returned to the Hill, finished your studies, and then, in the words of The Hamiltonian, “retired to a New Hampshire chicken farm to think it over.”

In ensuing years, while thinking it over in the tiny town of Dublin, you raised a family, engaged in various investment ventures, and contributed your time to community affairs. You also enjoyed building things and became an amateur architect. Asked to chair the Alumni Fund in 1978, you immediately applied your builder’s flair to the program, giving it a “grass roots” orientation and broadening its base. In your own words, “success comes from as many contributions as possible — the small as well as the large,” and you vigorously translated those words into action.

Under your imaginative leadership, ambitious goals were set. With your motto of “400,000 from 4,000” and “Towards a Million in the Eighties,” you aimed at doubling the fund within three years. Thanks to your determination and guidance, the first steps in organizing the highly successful reunion giving program were taken. You also revitalized the class-agent structure and encouraged special programs to involve recent graduates more actively in alumni affairs. As a result, your goal for the fund was not only surpassed, but you laid the foundations for its future expansion through the continuing programs, such as the GOLD group, which you helped inspire.

Just as your father was the architect of the modern Alumni Fund some 50 years ago, you became the architect of its resurgence in recent times. During those critical first years of Hamilton’s coeducational expansion from 1978 to 1981, your contributions as Alumni Fund chairman were of vital aid to the College. Now, a decade later, Hamilton continues to draw inspiration and strength from your pioneering achievement, and for what you have accomplished, your alma mater is forever grateful.