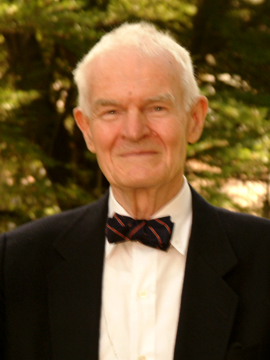 Back in 1947, The Hamiltonian summed you up as, “by all odds the most sincere person in school.” It went on to acclaim your two prize collections: campus honors and hot jazz discs. We have no catalogue of your jazz recordings, but we do have a lengthy list of your campus honors. They included letters in football and fencing, numerous academic prizes and scholarships, ­election to Phi Beta Kappa and Pentagon, and the presidency of the senior class.

You arrived on College Hill from Ithaca with the Class of 1945, but two years later, you, like many of your classmates, heeded your country’s call to military service in the midst of World War II. After three years on active duty with the U.S. Navy, you came back to the Hill to finish your studies. A sojourn in the Emerald Isle and a second A.B. from the University of Dublin ­followed, but in 1950 you again returned to Hamilton to give Secretary of Admissions Sidney Bennett some much-needed help.

After two years in the field, visiting hordes of high schools on the College’s behalf, and with a growing family, you decided to get into a new line of work — one that would require less time away from home. You chose banking, a career that, ironically, would comprise many overseas ­postings and much travel abroad. As a vice president and manager for the First National City Bank, you spent abundant stints in such places as Venezuela, France, Switzerland and Liberia, as well as at Citibank in Manhattan, until your retirement in 1989.

Through all those years and all those travels, you never lost contact with, or affection for, Hamilton. You have enthusiastically and graciously served your alma mater in various capacities, including Alumni Trustee. And you have been an especially generous supporter of the Burke Library and its book funds. But beyond your contributions and benefactions to the College, the Alumni Association takes particular pleasure in saluting you as, in the words of an anonymously written internal College memo found in your file, “the quintessential gentleman and all-around good guy.”