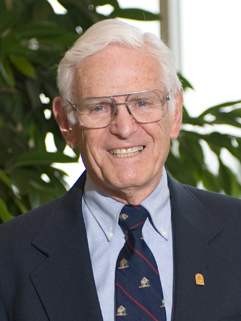 You arrived on College Hill from the Garden State of New Jersey, took up residence in the upper reaches of the Chapel, and helped cover your college expenses with a job soon to become obsolete — ringing the Chapel bell. While pursuing your premedical course of study, you found time to serve on the Chapel Board, run cross-country and manage the basketball team. And, with your reputed talent as a “high-pressure salesman,” you were also an effective collector for the Campus Fund.

Following your graduation Phi Beta Kappa, you went on to Harvard Medical School, where you earned your M.D. degree in 1955. After an internship and residency at Bassett Hospital in Cooperstown, you served for eight years in the U.S. Army Medical Corps. In 1967, you returned to Bassett and began a medical career of great distinction that would extend through 32 years until your retirement in 1999. Besides serving as chief of the hospital’s General Services Department and of its Division of General Medicine, you were medical director of the county’s nursing home for 29 years.

In addition, when not golfing or gardening, or following the fortunes of the Red Sox as a rabid fan, you have been active in your church and on advisory committees and boards of trustees, including Hamilton’s. An alumni trustee from 1978 to 1982, you have also been a member of the Alumni Council and faithfully assisted the College in its fund-raising activities over many years. In short, few alumni have been more ardently devoted and committed to Hamilton and its well-being than you.

You once observed of your Hamilton education that, “Most of the facts I learned have long been forgotten, but the values I learned and the ­vistas that were opened have enriched my life beyond measure.” Through your manifold contributions to your alma mater, you have generously repaid her for that enriching experience, and you have earned her profound gratitude as well as ours.