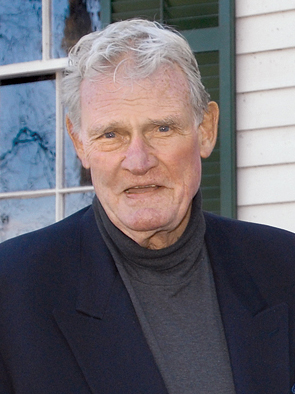 Few alumni have been longer or more intimately acquainted with this college than you. The son, grandson, and great-grandson of Hamiltonians, beginning with Oren Root, Class of 1833, you grew up across the street from the campus, in what is now the Alumni Center, where your parents, Grace Cogswell and Edward Root, contributed so much to the cultural life of this Hill.

Inevitably, you entered Hamilton, with the Class of 1944. You took an active part in student government and made your athletic presence felt on the gridiron and diamond, gaining election to Quadrangle, DT, and Pentagon. With the clouds of World War II increasingly overshadowing even this peaceful hilltop, you soon joined classmates in ­heeding the call to the colors, following your accelerated graduation in 1943. Three years later, and after gaining an acquaintance with naval receiving stations on an assortment of Pacific islands, you sailed back to Oakland and civilian life.

In 1949, having acquired a master’s degree from the School of Advanced International Studies, you began a four-year stint with the U.S. Foreign Service, mostly stationed in Jerusalem. The next 27 years of your working life were spent with petroleum marketing affiliates of Esso, now Exxon, in Africa, the Middle East, and Europe, and you concluded your long career with the company as vice president of Esso Africa, headquartered in London.

Throughout your many years of residence and travel abroad, you remained close to the College, if not geographically, at least in ardent loyalty. Since your retirement and return to this country, you have served Hamilton and your classmates in numerous volunteer capacities, from free agent for the Annual Fund to Alumni Council member and Reunion Gift Committee chairman. Currently, you chair Hamilton’s Committee on the Visual Arts, continuing a tradition of commitment to the arts begun by your father, Edward Wales Root, Class of 1905, who was the first to teach the appreciation of art to students on the Hill. Through your generous assistance and astute advice in furthering the aims of the Emerson Gallery, you are contributing to the cultural ­strengthening of this community, there­by adding another chapter to the long history of your family’s many distinguished services to Hamilton.