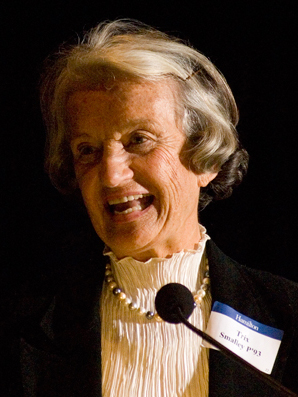 Patricia “Trix” Tolles Smalley began her lifelong connection with Hamilton in 1947 as a young girl when her father, Winton Tolles ’28, started his 25-year tenure as the College’s legendary dean. As a teenager, she made what she described as a “grand mistake” — telling her parents she had been invited to fraternity houseparties. She soon found herself whisked away to the Emma Willard School and Smith College, though the Hamilton campus was always “home.” It was, after all, where she met her husband, David Smalley ’56.

While raising her family, Trix worked for several years administering and managing governmental, philanthropic and nonprofit organizations, including serving as deputy commissioner for the Department of Cultural Affairs in New York City before she and Dave moved to London in the 1990s. Time and distance did not lessen her fondness for Hamilton. The Smalleys regularly hosted students and alumni in their homes, and Trix became a charter trustee in 1994, offering her perspective and much appreciated guidance to students, administrators and trustees.

Throughout her life, Trix remained proud of her family’s Hamilton legacy, reflected today in the Tolles Lecture Series and Scholarship Fund, the Patricia and Winton Tolles Pavilion and the fact that so many members of the Tolles and Smalley families are Hamilton alumni, including her son Brian ’93. In 2000, she delivered the Class & Charter Day address and told the assembled students, “This community — the hilltop and the town and the College where I was raised — has the space, the support, security and a sense of adventure and uniqueness to give one a sense of self and of community. I hope it has done that for you; it did for me.”

Before her death last fall, Trix Smalley learned that she would be honored today and was moved and delighted to be following in the footsteps of her father, who received the inaugural Bell Ringer Award in 1970. It is indeed fitting that we remember with gratitude this true Hamiltonian, who devoted a lifetime of energy, compassion and wisdom to the College she called home.