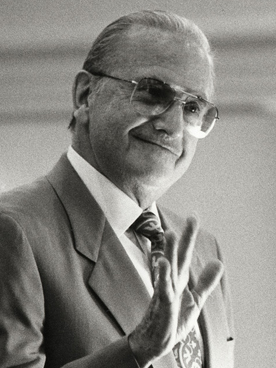 A native of nearby Utica, you excelled in public speaking and were active in student government at Hamilton. After leaving the Hill with a Phi Beta Kappa key, you went to Washington and participated in a pioneering government internship ­program, which was established by Hamilton Professor Frederick M. Davenport at the behest of President Franklin D. Roosevelt. The experience inspired you to seek a career in the law.

After three years in the U.S. Army during World War II, you earned your degree from Harvard Law School. In 1948, you returned to Washington to spend four fruitful years in government service, culminating in your appointment as a special assistant to President Harry S. Truman in the White House. Thereafter you held various corporate positions in the entertainment field, and later engaged in the practice of law in New York City. Throughout those years, you took a lively interest in community affairs, whether in New Rochelle or in Old Forge, where you long maintained a summer place. And you have also, with great enthusiasm and dedicated commitment, helped honor President Truman’s legacy by serving on the board of the Truman Library Institute.

In the meantime, you have sustained a warm affection for Hamilton, which has been tangibly demonstrated in multiple beneficent ways. Besides serving on the Alumni Council and assisting with Annual Fund and capital campaigns, you chaired Hamilton’s first planned giving committee. In addition, you served as an alumni trustee from 1978 to 1982, and you and your wife Dorothy have generously benefited Hamilton’s students with scholarship and prize funds.

You once commented that, “I can trace my career to the educational opportunity Hamilton afforded me,” and that, “in sum, Hamilton was there when I needed her.” We, in turn, can say, with abundant appreciation, that you have ever faithfully been there to respond to Hamilton’s needs as well, and any debt you have owed to the College has been more than recompensed by your loyalty and faith.