I will never forget the moment I learned I was accepted to Hamilton for January entrance. January admission was a foreign concept to me, something that I didn’t know existed until I was offered and researched it. I ultimately accepted my spot and decided on Hamilton’s partner program with Arcadia University in London. Not only would I be able to graduate on time, but I would be integrated with many other Hamilton students and it would provide a happy excuse to travel and study abroad. Looking back now, as a senior, I marvel at the independence I gained as a “Jan.” I felt like a grown-up living on another continent, taking classes, commuting, and cooking for myself. My semester in London was easily one of the most influential periods of my life. 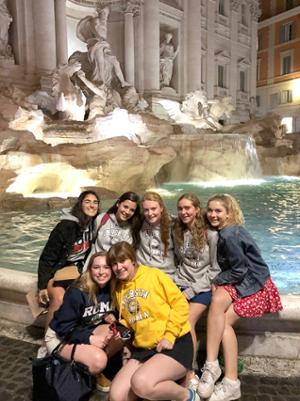 The London program offers courses through Arcadia University and a couple from City University. I took three Arcadia courses and one politics class at City. The course at City consisted of weekly seminars and smaller discussion groups, and introduced me to a different method of education and lectures. My academic schedule allowed for travel across Europe –  some highlights being the pizza in Naples, the coastline of Capri, and the Van Gogh museum in Amsterdam!

My return to Hamilton was initially daunting; joining our class halfway through our first year and jumping into Hamilton’s academic rigor was enough to make anyone anxious. However, once I stepped foot on campus on a snowy January day, my fears dissipated. Since “Jans” had the opportunity to attend Hamilton’s on-campus orientation in August, I knew several other individuals already who welcomed me (and my other “Jan” friends) with open arms. I attended the Club Fair and signed up for anything that caught my eye. Everyone was excited to meet us; while we were jealous of their fall semester at Hamilton, they were jealous of our semester in Europe!

Ultimately, I would not trade my “Jan” experience for the world. I returned as a more mature version of myself, with a semester abroad under my belt. My time in London not only prepared me for life as a college student, but life as an adult as well.