When I found out that I had been accepted into Hamilton College as a “Jan” admit, my shock quickly turned into excitement. While I initially felt like I wanted to get to campus as soon as possible, I was intrigued by the opportunity to take a different and more adventurous path than most incoming first-year students. SEA Education Association immediately stood out to me as an opportunity to dive into a single and focused concentration of studying the ocean through the eyes of a scientist and historian. Being able to combine my love for the ocean and passion for environmental studies was an opportunity that I couldn’t pass up. SEA Education Association allowed me to not only be a field researcher, but also a crew member on our research vessel, the SSV Corwith Cramer, that we sailed from Woods Hole, Massachusetts, through the Sargasso Sea, and into the Caribbean. 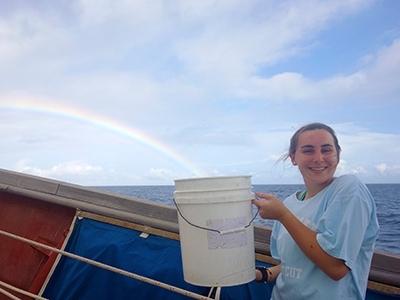 My semester was split into two sections, with a six week on-shore component followed by six weeks on the sailboat. On shore I was given the freedom to design my own research project; I developed a plan to study ocean acidification along our cruise track with one of my classmates, while taking classes in oceanography, nautical science, and maritime studies. One of my favorite things to do on shore was explore Woods Hole with my classmates and just be around the scientific community and marine science institutions that the small town on the Cape is known for. I also loved getting to know my other classmates through our daily trips to watch the sunset at Racing Beach and during our nightly “family” dinners.

When we set sail on our course of nearly 1,500 nautical miles (from Woods Hole to St. George’s, Grenada), the transition to life aboard the Cramer was challenging. We had a rotating watch schedule, which meant that we were on watch for six hours, sailing the boat, doing scientific deployments, and making sure that everything was running smoothly. Someone always had to be up at the odd hours, but we got used to this and other aspects of boat life very quickly. One of the most thrilling experiences of my life came towards the end of this trip when I became a junior watch officer in the middle of a strong gale. At the beginning of the watch the stars were out, the sky was clear, and we were sailing at around seven knots. I managed the log book, made course changes with the captain’s approval, rotated our lookout, plotted positions, managed hourly boat checks and weather observations, all while staying on my toes ready to answer any questions that the first mate threw my way. Just before the sun came up we decided to “shoot the stars” by using a sextant to establish our position on a map, and this is when I spotted the looming clouds signaling a squall. This was the first time I was challenged to call out commands to strike sails and prepare for the fast approaching storm. Everything went smoothly, and I realized I had gained the self-confidence, knowledge, and abilities to lead my team.

SEA Education Association gave me a family of scientists and sailors at sea, and an even greater connection to the ocean. It has immensely impacted my time at Hamilton and my confidence in knowing what classes and research I am interested in, as well as what I want to do after graduation. I would love to continue my studies of oceanography and eventually go back to become a sailing intern with the SEA Education Association programs, but the possibilities feel endless because of my “Jan” experience, for which I will be forever grateful.