When I applied Early Decision to Hamilton, January acceptance was not even on my radar. As I opened my acceptance letter in mid-December and read “Congratulations on being accepted to Hamilton for January 2015!” I immediately burst into tears. I didn't know if my emotions were because I was thrilled to simply be accepted or unsure about not arriving on campus in the fall. Ultimately, I applied to other colleges, but I soon realized I still wanted to be part of the Hamilton community. The reasons I chose to apply to Hamilton had not changed, but the path I would take to get to there had. The more I thought about being a Jan, the more excited I became. I lived in London for eight years as a child and realized I had the opportunity to return, as an adult, to a city that I once called home. 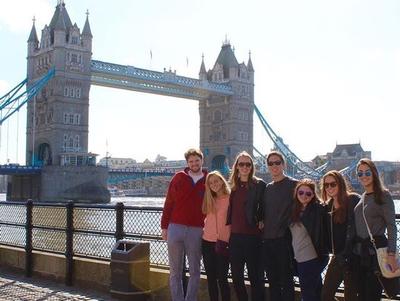 I travelled 3,278 miles to London where I moved into my new home and met the other Jans. As cliché as it sounds, the 33 of us became a family after that first day. We helped each other unpack, picked up bedding, grocery shopped, and learned our way around the city together. In a sense, I think my transition to college was a bit easier because I chose to study abroad in London during the fall semester. We Jans were a small group of first-years living far from family, friends, and things that were familiar. Everything was new, but we leaned on each other for support and guidance.

After three amazing months, and as the semester came to a close, many tears were shed. I was sad to leave the city where I had started my college career along with a courageous, independent, and intelligent group of people. However, what we all had to remember was that although we were leaving London, we were not leaving each other. We would be each other's support system back at Hamilton. This still holds true today. The friendships that I made with my fellow Jans are unique; while abroad we were there for each other through ups and downs and I can say with confidence that I will cherish these friendships for the rest of my life.

I was incredibly nervous to begin school at Hamilton that January. As a member of the Women’s Varsity Squash team, I had to come back to school two weeks early from winter break for practice. I was the only person moving into my dorm that day, but as soon as I arrived on campus my coach, Jamie King, came to Dunham to help me move in. He wanted to ensure I felt comfortable on campus and walked me to the squash courts for my first practice. I was joining the team halfway through the season, so I was worried about how I would fit in both athletically and socially. The moment I walked into the team locker room, however, everyone screeched with excitement and ran to hug me. They knew who I was and made me feel like I was already part of the team. Within the first three hours I was on campus, I knew I had made the correct choice to come to Hamilton.

While the transition back to campus for Jans is not seamless, you have a support group of students who have a shared experience. It is important to take that same sense of curiosity and sense of adventure back to the Hamilton community and engage in the numerous activities on campus. Jans are not seen as outsiders when they arrive; you are quickly integrated within the community and everyone is excited to meet you. The Hamilton community is inherently welcoming and friendly, which I saw both during my time in London and still see every day on the Hill.

If I had to do it all over, I would write my same story. Being surrounded by a group of adventurous friends pushed me to try new things. I learned how to cook for myself, budget my finances, and make travel plans that satisfied my wanderlust. It was a learning experience that I will cherish forever.